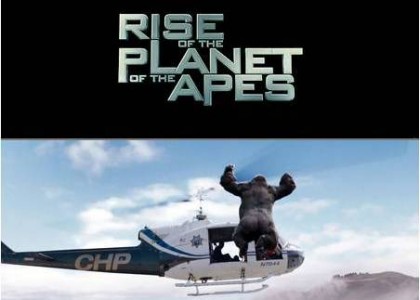 In this modern era of cinema you would be forgiven for dismissing this latest big-budget Hollywood bonanza as an unnecessary extra chapter to an already iconic series. It’s certainly not the first time a classic franchise has been rebooted and ‘revitalised’; attempting to replace charm and originality with extensive CGI and/or special effects. Superman Returns was a major disappointment, and Indiana Jones and the Kingdom of the Crystal Skull made owning a whip suddenly seem passé. There are of course exceptions. Christopher Nolan’s influence on a certain caped crusader has shown the world what can be done when a series is in the right hands for a fresh direction. Fortunately, Rise of the Planet of the Apes is far from a frustrating addition to a famous lineage.
The film acts as a prequel to the original series, offering a more scientific reasoning for the simian ascent to the top of the food chain. James Franco (Spiderman, 127 Hours) plays the role of Will Rodman, a gifted scientist who is desperate to find a cure for Alzheimer’s disease which has so violently affected his father, played superbly by John Lithgow (Shrek, Footloose). In research and testing, chimpanzees are the subjects, with one in particular reacting very positively to the drug, displaying significant intelligence and learning capabilities. However, after this chimpanzee escapes and shows significant rage, the research programme is terminated with all the chimpanzees being used for testing put down. Rodman secretly takes a young chimpanzee home with him, and raises him as his own child; naming him Caesar, teaching him sign language in the process. Unfortunately for Rodman, as Caesar grows older, he becomes much more difficult to control; ultimately being confined to a bleak and tyrannical primate sanctuary by court order. It is here where Caesar, portrayed through motion capture by Andy Serkis (Lord of the Rings, King Kong), becomes the de facto leader of the apes resistance to their human oppressors. From this point onwards, the film accelerates towards a thrilling finale atop one of the US’s most famous landmarks.
There is much to like about this summer smash. Stylishly directed by Rupert Wyatt, who with only his second film has confirmed himself as one of the most exciting young directors in Hollywood, the film allows the audience to actually care for these CGI animals. You constantly forget whose side you are meant to be on as you instinctively cheer on the apes in the final scenes. As Caesar sits in his cage, you share his despair and long for him to grab his freedom with both paws. A feat I can’t imagine being attainable with a man in a cheap monkey costume. This is the positive of CGI; it can take you closer to reality, the further it pulls you away.
This isn’t a film for human character development, which is understandable. It isn’t ‘our’ film so to speak, it isn’t our ‘rise’. Franco serves as a steady name to boost the box office, but little else. The true mastery of this film is the storytelling that takes place when only the apes are present; with only expression and movement as the language to further the plot, we are nevertheless hooked and not once let go.