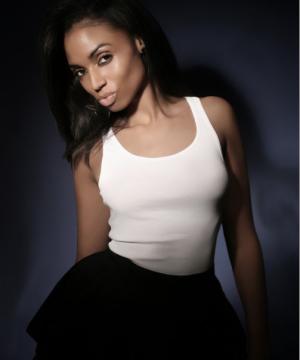 You will recognise Gabrielle Ryan from Brit urban blockbuster ‘Shank’ where she played the ultra feisty Phoneix. She is about to hit the big screen again in the much anticipated Halloween release of ‘Demons Never Die’ where she stars alongside Robert Sheenan, Tulisa, Ashley Walters and many more. Gabrielle takes on the role of Amelie, a sexy French waitress. It is being called the UK’s answer to Wes Cravens Scream Trilogy. “My lines were in both French and English, it was so much fun as it was a really young cast so I can’t wait for its release”.
At the end of the year Gabrielle also appears on the small screen as one of the leads in a new Police drama called ‘Brixton Hill Cop’ in a style that Gabrielle explains has never been done in the UK before. “It is as gritty as ‘The Wire’ that was aired on HBO in the states a few years back. Its creator and writer Jason Barrett is brilliant and filming that has been amazing. My character Sandra is the PA to Dean who is known as the Brixton Hill Cop. He’s a former Policeman who quits the force for various reasons and decides to work alone. Sandra has some great story lines and working with my co-star Charles Venn who plays Dean is incredible. We get to see every character grow which is rare in shows these days I find”
Gabrielle (hails from ‘Hove…Actually’) took the reverse route with her acting career, she landed two major roles before taking time out to go to Lee Strasberg Theatre and Film Institute in New York.
“Formal training was something that I wanted to have. I was very lucky that I landed two great parts prior to this, but after shooting them I still wanted to accept my place at Strasberg, so I moved to New York which was one of the greatest experiences of my life”
Gabrielle clearly doesn’t have any free time right now as she divulges that she is about to embark on playing her most challenging role yet in a theatre production entitled “And Then They Came For Us” that has already performed in the House Of Commons and around the world. “It is a play about the holocaust and is based around The Anne Frank Diary and her step-sister Eva Schloss’s survival of the holocaust. I cried when I first read the script as it was so touching and emotional. I had to audition for Eva herself which was very nerve wracking but I am very honoured to be playing the part of Anne Frank herself “.
Life is very exciting for the foreseeable future and although Gabrielle admits that she doesn’t have time to stop she gleams that it has been a fantastic year and how she can’t wait for what next year holds. “I am pencilled in for some very interesting projects so fingers crossed. I feel very blessed that I am able to do something I love and can’t wait to work on some very exciting international projects currently in the pipeline”.