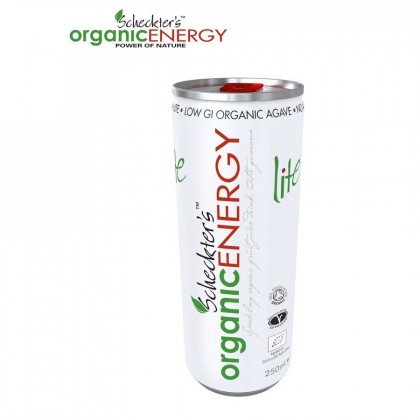 Get a lighter natural lift with NEW Scheckter’s OrganicEnergy Lite

Like the original, this delicious, natural, organic drink harnesses the power of nature to give a real energy lift whilst also boosting mental performance – but with the added bonus of using Organic Agave instead of cane sugar which means 33% fewer calories.

Each can of Scheckter’s OrganicEnergy Lite contains the perfect combination of organic and natural ingredients to provided sustained energy. The blend of 100% natural  ingredients releases energy over a longer period of time, creating a sustainable energy lift that avoids the short lift and sudden ‘crash’ of other energy drinks.

Scheckter’s OrganicEnergy Lite drink is 100% natural and made from a blend of organic fruit juices – lemon, pomegranate and elderberry which give it the same great taste as the Original variety and uses organic Agave instead of raw cane sugar which means 33% fewer calories.  Agave has a low glycemic index and so not only helps to slash the calorie count but also helps prevent the usual ‘sugar crash’ associated with high sugar drinks.  The other active ingredients remain the same as in the Original – extracts from organic raw green coffee beans and organic Guarana give the physical and mental boost from caffeine, Ginseng helps relieve stress and Green tea helps boost mental focus. As an added bonus all the ingredients are 100% natural and organic.

Toby Scheckter, founder of Scheckter’s Organic Beverages and former racing driver, was raised on Laverstock Farm, an organic farm in Hampshire. Involvement in the day-to-day activities of running the farm gave Toby a deep understanding and appreciation for the processes involved in producing quality organic products. Recognising that there was a significant gap in the energy drinks market for a healthier alternative, Toby spent two years developing the worlds first 100% Natural, Organic and FairTrade approved energy drink with a simple goal – creating the best tasting energy drink using only the best quality ingredients.

Following the success of the original drink, and due to the unprecedented customer demand, Toby has spent the last 12 months developing Scheckter’s OrganicEnergy Lite and has managed to remove sugar and cut calories whilst maintaining the delicious flavor. Commenting on the new launch Toby commented; ‘We have had such a great response from everyone on the launch of Scheckter’s OrganicEnergy and are thrilled they have had such demand for a Lite version. Fewer calories doesn’t mean we loose out on taste though!’

Scheckter’s OrganicEnergy Lite is available from Sainsbury’s and at health food stores nationwide and costs £1.35 for a 250ml can.

Top 50 Things Brits are doing to help with Self-Isolation