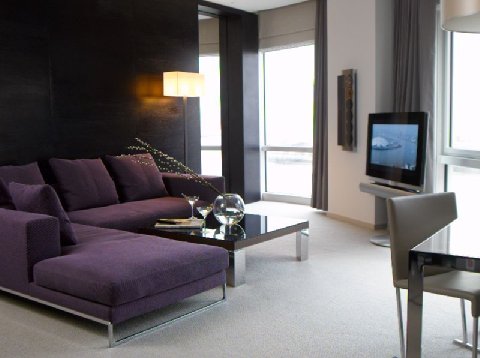 After a long day, take time out and indulge in the latest facial and body treatments at the hotel’s stunning East River Spa, which provides a relaxing urban hideaway. This London spa offers must have treatments, including facial therapies, Moroccan steam cleansing ritual, body therapies and massages. Unwind and make use of the

Guests can dine in the glamorous Azura Restaurant & Bar, featuring its very own outdoor riverside terrace offering spectacular views across the river. Modern British fare is served in the restaurant and cocktails are created, in the bar, by the in-house mixologists. Starters dishes of pressed ham hock and prune terrine, with fresh piccalilli and basil oil are served. Main courses include Irish rib eye steak (aged for 28 days), served with grilled vine tomatoes, chips and peppercorn sauce. Whilst delectable deserts include warm apple tart and toffee sauce.

This New Providence Wharf hotel boasts seven fully equipped business meeting rooms, including a spectacular conference suite with break-out rooms holding up to 200. Hire out the River Room for views of the River Thames and The O2 venue. Each meeting room features natural daylight plus the latest AV technology.