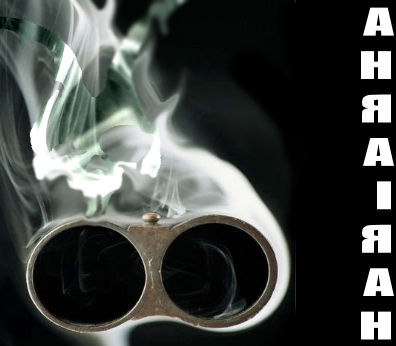 Featured on BBC introducing, and just released a track on the Independent Charts, Mike Rancid the mind behind ‘The Ahrairah’ puts a classic horror spin on modern electronic music.

Hey Mike, you’re the mind behind the music for Ahrairah, could you tell our readers how you started out in music, where did the interest in making dubstep come from?

I started making music from a young age. The first thing I remember making a full track on was MUSIC 2000 for the pc. A program probably responsible for getting a lot of producers and song writers into doing what they do now. Needless to say the track was pants, but the idea of producing really sparked with me, and I would sit up till 4-5 in the morning most nights just writing and experimenting, drinking tea, and staring at a hazy monitor through a cloud of smoke. It was around the age of 17 when I first got in to the Drum and Bass scene, I started to MC for a few different DJ’s under social Decoy, and Urban renewal on Suburban Bliss Records. By then it was less of a choice about what I should do with life. I got stuck in to anything musical I could get involved in from my first weird Industrial Metal band called “Unhinged” to the acoustic folk/ country I still perform now.

You’ve just released a track ‘Dance for the Lycan’ on the Independent Charts. Can you talk us through the creative process behind this song, and where your inspiration for making your songs comes from?

I’ve always had a love for horror movies, probably as strong as the love I have for music. I like the classic background to the Monsters and beasty’s that mirror our own fears and imperfections. Often the characters I choose reflect my own. So when I write I try to tell a story or portray an emotion of the ghouls or monsters. “Dance for the Lycan” is about a werewolf and the first time it changes. And the conflict of emotion that happens after.

Where can we find you playing live? What does a live performance include for you, do you DJ, or have a sampler machine? How do you get the crowds going?

I play all over the place. A lot of the time it’s a last minute thing that springs up. But you can find me from free parties to festivals all over. I look to start touring the album upon its release in Jan. The way I play live is a mix of styles between your regular DJ’ing with tracks I produce in the studio, mixing it up with Kaos pads synths and a whole bunch of other stuff.

If you could play any venue in Britain, where would you like to perform and why?

I would love to have the chance to play any of the big festivals. After performing along side Reef , Top Loader, and Dodgy at Lakefest earlier this year, its got to be said there’s nothing like getting your fingers cold for your fans. But any festival or gig is always a pleasure to play if the people there are feeling it. A room of 30 people diggin ya is better than a 1000 that came to see someone else.
How are you balancing you life and your music? Where do you find the time for both?

Allot of my day is consumed with practicing, writing, gigging or promoting myself. I very rarely get to do anything else apart from smoke and drink Coffee. And at times it gets hard as an artist. There’s no promotion when you do a good job. And unless you keep shouting your name as loud as you can people can forget you in a day. Which means that even when life hands you a few blows, you got to act like it doesn’t matter, and carry on shouting. There’s no time to sit and wait for someone to give you the opportunity no matter how bad shit gets. So it takes up allot of your life if you want to do it pro. I promote by signing up to every social network site I can think of. Selling music and merchandise online etc. But it has to be said nothing spreads the word like gigging as much as possible, and music videos. Make a good one and people will remember it. Just like they remember a good show! As I said previously it’s less of a choice and just something you have to do. Any real musician will tell you the same. You’d go through anything just to see the big stage once with your name in lights. And finely feel you got that promotion you always wanted. And to do that music has to be your life! And you got to still be just a little bit lucky too.

What can we expect for the future of Ahrairah? Have you got any plans for world domination, or are you just going to keep doing what you’re doing best?

A new album in the pipeline online release date 29th 01 2013, called “Postcards From Oblivion” But something a little sooner. The release of the single “Shotgun”, in late October, something a little more sinister and grimy, one of my personal favourites. Would try and dominate the world, but there seems to be to many people already trying to do that, so I’ll just keep doing my thang and hopefully folks out there will like what I’m doing.

Its been cool doing this interview with you, Thanks For liking my stuff enough to find out more about what I do, and Hopefully you’ll like the new stuff just as much.