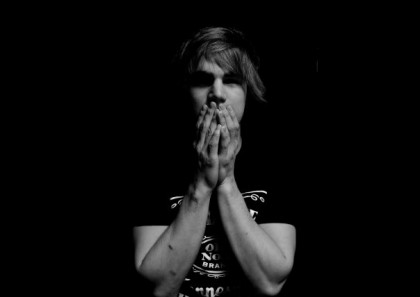 David Dino White has just recently released his track Sweater Weather through the Independent Charts! We have a chat with him about his life with music, and the ins and outs of being a musician.

How long have you been making music David? Has music always been in your family?
I grew up in a house where lots of Aerosmith and Shania Twain were played and inherited my first drum kit when I was in grade 7. I was known mostly for my drumming in high school, but as a result got to spend lots of time sitting around in basements where guitars and basses were readily available. As I grew older the limitations on drumming such as my parents sleeping patterns, and not being able to play while conversing to women on the computer became too frustrating and as a result, I decided to fight the system by lying about my age to get hired at Tim Hortons where I worked exactly long enough (to the day) to buy my first guitar. Where I lived there were a lot of drummers who were better than I was and once the word got out that I could hold my own just as well on a guitar, there was no turning back. I went on to play with a number of bands through the time between then and now, but only started writing songs completely independently very recently.

So what drives you to write?
I once heard a great quote that goes “We all fear death and question our place in the universe. The artist’s job is not to succumb to despair, but to find an antidote for the emptiness of everyday existence”. I think of that quote every time I sit down to compose, and through those compositions, am always hoping that I will inspire like minded individuals to find their own antidote, be it pursuing their own dreams, or simply taking comfort in knowing that they aren’t the only crazy ones out there.

What about the creative process? Do you start with a melody, or a lyrics and work from there?
Usually I record my guitar idea(s) first. I tend to write guitar parts that imply melody also, so that side of things comes very easily but equally so, stays very reluctantly. As a result creating lyrics that have the right meaning and amount of syllables to fit the story and mood I am trying to convey, often takes upwards of 6 months to be finalized and a lot of song ideas are cast away as well.

How long do you spend practising a day?
I play my drums or guitar for at least an hour or two everyday but I’m rarely consciously practicing anything. Shows are the only real practice I get lately because of the pressure that comes with performing in front of people that my pet cat Bowie still hasn’t learned how to provide for me.

Where can we find you playing live? Have you had any tours of late?
Last year I organized a tour across most of Ontario, Canada with my pop rock duo “White Coals”, but I have yet to tour independently. Unfortunately, being as it is that I’m back in school and carless at the moment, the farthest I ever travel is to a local open mic or benefit concert.

Have you got a favourite venue? If you could play any venue with any artist who would it be and where?
Any venue where the audience listens would be a dream come true to me. Finding passionate listeners is easily one of the greatest challenges any musician in this age will face. I love the music and fan bases of The Tallest Man On Earth and Patrick Watson though and think that opening for either of them would probably serve me well for where I’m at right now.

What challenges have you faced as an independent artist? What have you done to overcome these challenges?
The biggest challenge for me, besides making the money to record the songs (which I think most independent artists struggle with) was getting my producer and long time friend Ben Leggett to understand my vision. We had worked together before on a few different kinds of projects but never on anything quite so eclectic. Originally I had only intended to play guitar and sing while allowing him and some very talented friends of mine to take care of the other instrumentation, but in the end could not convey the ideas I wanted to hear in any way besides playing them myself. It took a lot longer than either of us had anticipated because I wasn’t even close to being ready for such a task, but ultimately, I don’t think either of us could be happier with how it turned out.

How do you manage to balance Music and life?
Stay off Facebook and let the iPhone die. Sometimes that’s still not enough, but it’s working well enough for the time being.

Where do you think your music will take you? Where would you like it to take you?
I’m overly confident that I’ll be able to get to the places I’ve always wanted to visit with or without my music so my only real hope is that wherever it does take me I will find myself surrounded by plenty of light and love.