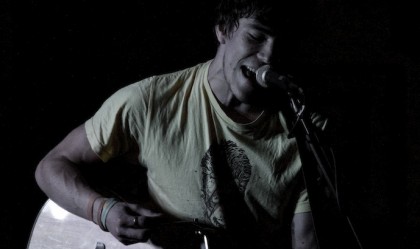 Chelsea Monthly gets the exclusive interview with Independent Artist Fred Irwin about his music and recently released single ‘Wasted with you’ through the Independent Charts!

Hi Fred, thanks for talking to us today. So when did music change from
being something that you listened to, to something you wanted to be
actively a part of?

Happy to! I guess the first signs were when most of the sign-up sheets in
the karaoke bars on holidays I had as a kid had my name on them! I picked
up guitar when I was 12 and spent the next few years just playing along to
my favourite songs. It’s only a couple of years ago that I started getting
a real taste for playing live with my old band, but it was still only
covers. I’ve been writing songs since then, and a lot of them weren’t
really written with the band in mind and so by the time we split, I had a
small collection of songs that I was itching to play live.

I know it’s commonly asked, but where do you get your inspiration for a
song? Do you sometimes find it hard to write anything or does it come easy
to you?

It really varies from song to song. Everything I’ve written is at least
slightly based on personal experience. Sometimes I’ll try and write a song
around a memorable event and use that as the inspiration whereas other
times I’ll just write about what’s going on in my life at the time. I’m not
really inspired to write about what’s going on in the world around me, I
write about the things that happen to me and that are personal to me. But
I’m not the only person to go through things I write about, so people can
relate which is great.

What about the creative process? Do you start with a melody, or a lyrics
and work from there?

Again, it really does vary. There’s songs like Wasted With You or Don’t
Panic that are very much based around a chord progression or riff. Then
there’s songs like Find My Way Home where I was sitting on lyrics for ages
and put the music to it. On the whole I’d say the lyrics come first, but
every know and then I’ll come up with some chords or a melody that I look
to build on.

How many hours a day are you practising or writing?

Sometimes it can be difficult to find as much time as I want to practice or
write. I’m one of those people who will go a few days without touching my
guitar but then when inspiration hits I’ll be playing for hours on end.

I get most of my gigs around the Staines/Chertsey area. I know some great
guys called GetGigsEasy who’ve given me most of my gigs to date. I’ve got
my album launch party in my hometown on November 24th, the Rose and Thistle
in Frimley Green which will be a lot of fun. All of my shows so far have
been in the South but I’d love to start playing further afield.

You just released a track on the Independent Charts ‘Wasted With You’ can
you tell us a little about the song?

It’s a song about regret, wishing you’d done all the things you’ve done
with someone else. I think it really sums up the album Nights Like These.
There’s songs about love and loss and there’s songs about living for the
moment and doing the typical things that young people do. I guess this song
is about both, about a time when I was doing all the things I wanted in
live but in hindsight wishing that I’d done them with someone else.

Are you writing anything new at the moment? Do we have any new tracks to
look forward to?

I’ve always got ideas going round in my head and I’m often writing stuff
down but whilst there’s a couple of songs that were written in a night,
most of my songs are a result of writing one line, or a particular riff and
then coming across it a few weeks or a few months later and really working
on it. I’m just focussing on the release of the album and seeing what
people think of those songs. I’ve had a great reaction to Wasted With You
so far and I’m grateful to everyone who’s taken the time to listen to it.
It shouldn’t be too long before I put a new song or two out and there’s
some B-sides coming on the remaining singles from the album too.

What challenges have you faced as an independent artist? What have you
done to overcome these challenges?

I guess the hardest thing was taking the step from just having songs and
playing them to myself and and actually putting them out there. As I’ve
said, some of my songs are quite personal and so I’ve had to allow myself
to feel comfortable with people hearing them. I guess you just have to take
the step and put it out there for whoever wants to hear it. I’ve enjoyed
everything I’ve done so far in this and so I guess the biggest challenge
was overcoming the fear of putting songs that were personal to me out there
and I’m lucky that it’s led to shows that I’ve enjoyed playing and people
seem to enjoy being a part of.

How do you manage to balance Music and life?

It can be a struggle. I work full time and so it can be hard to find time
for everything else. I’m lucky to have an understanding boss who’s pretty
flexible and I’ve been able to get to gigs and always had places to stay.
When it comes to writing, I always have a chance to sit down in the evening
to get something down if there’s something I really want to work on. At the
end of the day, I love music and so I’ll always find time for it, I just
have to find that time around life I guess!

Where do you see yourself in five years with this?

I can honestly say I have no idea. I enjoy playing music and if I achieve
something by doing it then I couldn’t be happier. As long as I can continue
to do what I do whilst having a lot of fun on the way, I’m happy and I hope
that’s the case in 5 years.