New Zealand band ‘The New Brides’ set to release on the Independent Charts! 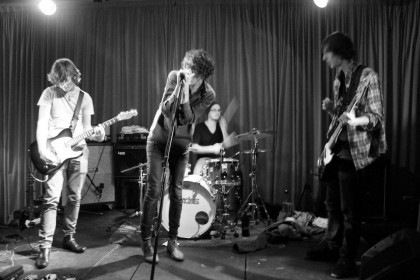 Today we have the privelidge of speaking with a band from New Zealand. ‘The New Brides’ are releasing their first single through the Independent Charts entitled ‘Record’ we at Chelsea Monthly can’t wait to hear it! Let’s get in deep with the band.

Hi New Brides! Thanks for speaking to us today. So how and where did you guys meet? Was it music at first sight?
Hey Laurence, hows it? Thanks for getting in touch. Yeh, the new brides, basically we’ve all converged on the same city and we’re playing all over it. Theres Billy, a young bass player with a car. Billy met Qedric, a seasoned muso with a good ear and some limited ability on his chosen instrument the guitar – though a later purchase of a delay pedal helped him along. They met through an accomplice who drummed well (for a while). We managed to get a refund on the drummer and bagged a great deal when Mark, a beat machine with cash to buy a new kit joined up and was initiated into the group with the now infamous new bride roof fight.

Who writes the songs, or is it a collaborative effort?
During this time and unbeknownst to the three, a keen musician named Johnny had just moved to the city from the UK, following his heart but unfortunately leaving behind his guitar. Now guitarless, Johnny spent most of his time drinking and writing, and so unwittingly wrote the basis of what is now a good chunk of the songs and lyrics.

Where can we find you playing live?
We play all the local venues and have faced every kind of stage, sound, room & crowd which has made us a lot tighter and stronger in loads of ways. Our first gig was at this top venue but on a bit of a shitty night, we learnt that its not where but when you play, and we’ve since been back there to smash up a Saturday nite.

Are you writing anything new at the moment? Do we have any new tracks to look forward to?
We’ve got a solid catalogue of tunes and plenty more on the way. We picked five and recorded an e.p. in August. We spent three days at a premier studio, we actually couldn’t get the date we wanted because Flight of the Concords were in there. Those tracks were mixed and then bussed off to New York City to get mastered. They sound great by the way New York, thanks guys!

You are just about to release your song ‘Record’ through the Independent Charts, could you tell us a little more about the song and how it came to be?
We grabbed Record from those 5 for the ‘single’ or top track. There’s a bit of a weird disco feel goin on, in the best sense possible. It has a great intro; fast enough, and if you can remember a few lines you pretty much have it down, then just get the air guitar solo nailed and you’re done. It’s catchy, whistle it and see.

If you could play any venue with any artist who would it be and where?
At the moment we’re trying to get a slot with the Beatles at the Cavern but they never return our texts, otherwise we reckon we’d have done well as support for the stones at altamont, or maybe not, who knows.

What challenges have you faced as independent artists? What have you done to overcome these challenges?
Writing and playing music is by far the easiest part of being an unsigned band. We don’t have the management and PR hookups that come along with a major record deal so making contacts and figuring out how to get our music out there has been the biggest challenge, a learning curve.

How are you managing to balance Music and life?
Music and life… it’s not so much of a balancing act as you obviously can’t have one without the other. So we play music when we’ve ran out of jokes or beer; we do a lot of gigs so we can sometimes have them as our practices and jam the new stuff when we’re hanging out. We play great venues and we have a great set up, huge space, & as much noise as we can get away with until the police show.

We throw parties, do what we like and there have been some times, some bad times, but that’s the life part. There’s 4 band members in the new brides but there’s a lot of people who come see us or that we know who are just as much into this as we are, we’re just the soundtrack. Without the music we’d probably get into some bad habits.

Where do you see yourselves in five years time with the music? Is there some kind of master plan, or are you just going to keep making the music you love?
Both. The music will keep on happening. We’re working on a video – that’s something coming up to look forward to. We’ll gig, we’ll tour, we’ll do an album and then another. Chances are we’ll be playing your local dive soon, so be prepared! We’ve had some great interest from local and international promoters and we’re pretty excited about the future!

Thanks for talking to us guys, we can’t wait to hear record when it hits the Charts! Good luck with the video, hopefully you’ll be playing the local spots down London way in the future!