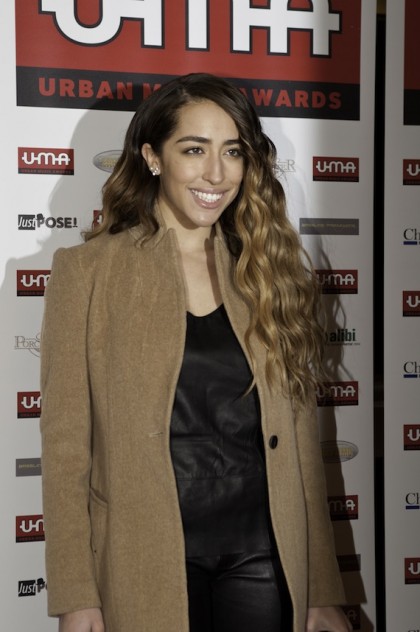 It was a successful night at the 10th annual Urban Music Awards which took place this weekend in London (1/12/12). Past UMA winner, Sway who has had a successful year in and out of the charts won the award for Best HipHop Act 2012 .
Collecting his award, Sway commented “The UMAs is one of the original and credible awards ceremonies in Europe for HipHop and R&B music. I don’t think most artists understand that without the UMAs , UK urban music would never have been taken seriously or become the commercial success it is today. Most new artists today currently topping the charts might be unaware of the significance the Urban Music Awards made in promoting and investing in UK urban music acts at a time were 10 years ago no, and I mean no, other awards ceremony cared about British urban based acts”.
This year over 1.5 million votes were received online and the social media has seen an increase over 10,000 new followers supporting a movement that started over 10 years ago. Loaded Magazine and Loaded TV (Sky Channel 200) were announced as the official media and broadcast partner this year and were on hand to film the awards ceremony in it’s entirety.

The night’s catering was provided by Grain of Salt who tantalized everyones tastebuds preparing guests for drink sponsors Bassline Bars , MyCocktail and Jaigermiester who made sure everyone was in a cheery, merry mood with their brand of cocktails and shots put together exclusively to celebrate the 10th anniversary of the Urban Music Awards.
The Best DJ category, was picked up by Kiss DJ, Shortee Blitz who commented “This is a proud moment” whilst in the heavily contested Best Radio show category, Kiss, 1xtra, and Choice presenters battled it out for this category which was in the end won by BBC 1Xtra’s Charlie Sloth who in his acceptance speech, thanked the UMA and all his listeners for the support.
Newcomers, Rudimental won Best Music Video for their hit single ‘Feel the Love’ featuring John Newman, and Best Producer was a tie between Naughty Boy and Flux Pavillion with Flux Pavillion just about making it ahead of Naughty Boy with a slight lead in votes towards the closing deadline. Flux Pavillion, currently on tour, sent a video acceptance speech to show it’s support. London station, Choice bagged the award for Best Radio Station sponsored by Wozityou.

2012, was ultimately set aside as the year for the Urban Music Awards to celebrate a decade of history making as the first ever awards show to break the UK urban genre into the mainstream and expand across the pond launching in the USA, France, Jamaica and now Africa. The night moved into some fantastic performances from Afrobeats star and new UMA winner of the Best AfroBeats/African category, Fuse ODG, who got the crowd going and even taught members of the audience how to do the Azonto Dance. Award winning and Best Gospel Act nominee Rachel Kerr, also graced the stage with her full band giving an electrifying performance to get the crowd going.
The awards show was hosted by UMA founder, Jordan Kensington, who introduced a plethora of comedians to add the laughter to what was a great an exciting event. Comedy legend, Bobby Davro, dazzled the crowd with his one liners and comic routine, Paul Chowdry, then stepped up for a 5 minute routine that got the all audience in pieces. Newcomer Jimmy James Jones warmed up for what was the best comedian of the night, Abandoman who got the audience literally on their feet with laughter as his brand of comedy freestyle rap from Ireland made people understand the diversity of what the Urban Music Awards is all about. Celebrity presenters including Denise Welch (Loose Women), Preeya Khalidas, Star Boy Nathan, Poojah Shah , Levi Roots, Lembit Opik, Francis Bouille (Made in Chelsea), Danny John Jules (Red Dwarf), Jimmy Akingbola (Holby City) and more graced the stage to add some fun into the mix of activity.
Winner of the Best DJ in 2011, DJ Nikki , had the honour of bringing the soundtrack to the whole awards ceremomny. Nikki literally showed the audience why she is one of the best Dj’s in the UK by keeping the music and rythms to the UMA consistently in flow! Denise Welch commented “I am here with my son, we are having a great time and think this is an absolutely fantastic event. What is great about this, is that the UMA obviously understand that this music is now listened by people across the country in all different sectors of life young and old and to incooperate all this into one event is totally mind blowing”.

As the night drew to an end, host Jordan Kensington took the audience back to the old skool by introducing a plethora of past UMA legends who have paved the way for what it is today. From Elisabeth Troy who performed all her MJ Cole hits and DJ Luck & MC Neat who did a medly of 7 chart topping numbers from the 90’s era before presenting the prestigious Lifetime Achievement Award to legendary DJ , Norman Jay M.B.E .
Norman Jay M.B.E who attended the event with his Dad gave the most touching acceptance speech . He commented ” I have waited 10 years for this, and I am extremely proud of my MBE and now my UMA. The UMA means so much to me, because I understand the struggle, adversity and critiscms that this organisation has had to go through to reach were it is today. The Urban Music Awards is an inspiration for standing, sticking and never moving even when the weather is not in your favour. If there is anything that can be said is that when you believe you will achieve. I am part of that, from a single record that my Dad sitting here let me play to several years later having played to thousands and millions worldwide”.