ST. Maarten gets the green light as top landing destination 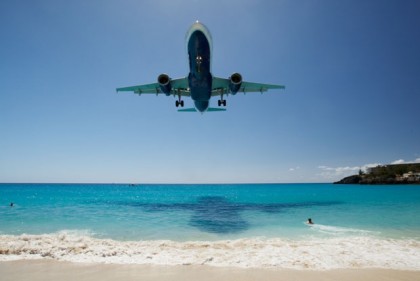 A leading global booking platform for private jet charter reveals the beautiful island of St. Maarten as the best for air landing in their annual Top 10 survey.

PrivateFly’s online marketplace makes it much faster, easier and more cost-effective to compare and book air charter flights. The PrivateFly platform is available in several languages and via iPhone, iPad and Android apps.

The company was awarded Website of The Year in 2011 by Flight International, the judges describing it as “the iTunes” of aviation. Founded in 2008, PrivateFly is based in St Albans, Hertfordshire. In September 2011 it secured investment fundraising of £2 million.PrivateFly.com asked travel fans across the world for their most scenic airport landings in its annual survey*, with the most votes going to the Caribbean island of St Maarten – where aircraft of all sizes land just metres from the beach at Princess Juliana International Airport.

Adam Twidell, CEO of PrivateFly.com and a member of the judging panel, comments: “The top ten is an annual bucket list for air travel fans, giving a fascinating mix of global descents to fly before you die. From major city views such as London City and Los Angeles; to tiny remote airstrips such as Phinda in South Africa, where aircraft land in the middle of a game reserve. Or the tidal beach runway on the Isle of Barra, in Scotland’s Outer Hebrides, last year’s winner.

“St Maarten is a truly exhilarating landing and a well-deserved winner. The approach begins over an expanse of blue Caribbean, coming in so low and close to the beach you can almost read the sunbathers’ newspapers below. It literally takes your breath away.”

This year the private jet booking service teamed up with a number of major names in the travel industry to form the shortlist. Judge Patrick Jephson, aviation writer and former private secretary to Diana Princess of Wales, nominated St Maarten for the poll, commenting: “Landing among the sun-loungers. Always a thrill.”

Regina LeBega, Managing Director of St Maarten’s Princess Juliana International Airport comments as follows: “We are very excited to have been chosen as the world’s most stunning landing. This recognition comes as we celebrate the 70th anniversary of the airport, so it is a most welcome birthday gift.

“Not only is the landing on our island the most stunning in the world, we offer a first class international airport with an impeccable safety record, which continues to top our priority list.”