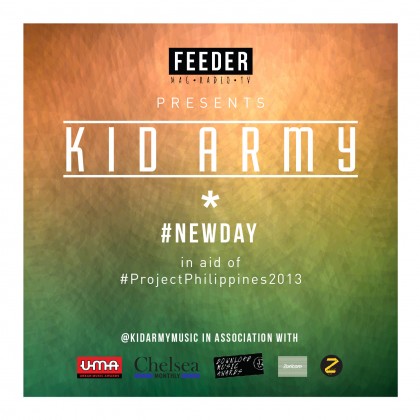 KID Army & The Future Machine (FM) are a Brit Pop / Ska Influenced /alternative band, composed of KID Army (lead vocals, rhythm guitar), Zeo (lead guitar, Vocals), Faye XT (bass guitar, synths, backing vocals), and Sia (drums, backing vocals) are back with the new single #NewDay. After a hiatus, this band are preparing for the launch of their 2014 album but have chose to release the single New Day in support of the #ProjectPhilippines2013 project.

The band have a huge following in Asia, Eastern Europe and South America . Their brand of music is said to have been drawn from such bands and musicians such as UB40, Blur, Radiohead, Ray Charles, Seal, N.E.R.D, and Oasis.

The band was formed at the 2008 Glastonbury Festival by KID Army. They went through a variety of names before settling for the Future Machine.

In 2009 Kid Army & The Future Machine (FM) returned to Glastonbury festival with an electrifying performance and they also went on to play at Roskilde Festival, and over 20 festivals throughout Eastern Europe and Asia.

In 2010, they won the Best Newcomer Award at the Download Music Awards and enjoyed a Top 10 hit with ‘She Cold’ in Japan, South Korea and South America.

The band are back, bigger and better after signing a brand new distribution deal with Swedish Heroes Music and Feeder. 20th of December 2013, the band release their debut single ‘New Day’ which was written by KID Army.

The single is dedicated to #ProjectPhilippines2013 which aims to raise awareness and much needed funds for children affected by the Typhoon in the Philippines.

A first video was filmed in the US and released at the start of the year. The second video was shot by TV production house, Feeder with a 10 day shoot including filming in Spain, Mauritius, London and the Philippines and is currently scheduled for release alongside the single #NewDay on the 20th of December 2013 to mark the new partnership with Feeder and the #ProjectPhilippines2013 campaign

Kid Army commented ‘We have grown and matured more in our music after concentrating on several side projects for the past two years. We wanted our first single to really resonate with the mood of our fans and music lovers globally. In #NewDay, there is a message of new beginnings, leaving the past behind and focusing on a much more present/positive outcome.

To dedicate all the proceeds from our debut single to the #ProjectPhilippines2013 campaign is also very special to us as after touring and travelling worldwide. It is easy to see how much of a big impact we can all do by doing something really small to support our brothers and sisters worldwide at a desperate time of need‘.

#NewDay (which is being released on the 20th of December 2013) is lifted from the forthcoming album #AllergicToBadMusic which is scheduled for release in March 2014.

The single #NewDay has already received support and is currently on radio air play in over 15 countries including ; France, Sweden, Germany and Switzerland.