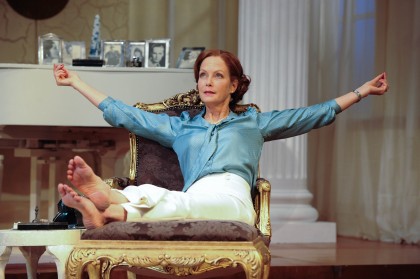 Jenny Seagrove is something of an expert when it comes to reimagining Noel Coward on the stage. The star of theatre, TV and film has spent the last two decades bringing to life the wit and flamboyance of one of England’s greatest playwrights. Now, the 56-year-old is about to add her sprinkle of stardust on to yet another Coward special.

Seagrove, the partner of theatrical producer and chairman of Everton Football Club Bill Kenwright (which, by proxy, makes her a huge Evertonian), has starred in many of the West End impresario’s productions over the past 20 years. The duo join forces once again for a take on Coward’s champagne popping, love triangle comedy Fallen Angels, due to begin its run in January.

Despite “not actively chasing” Coward’s plays, Fallen Angels was certainly on Seagrove’s theatrical wish list, as “it’s a crowd pleaser and it’s always something I wanted to do.” Now, after a trial run of small warm-up shows last year, the production’s nationwide tour kicks off at the end of this month.

“We did it for a few dates last autumn and it was so much fun we’ve decided to do it again. It is great fun… I love making people laugh, it comes quite easily and I do love it. In fact, I am quite shockingly badly behaved sometimes in this play: act two is so silly, so very, very silly, that I often find I am making myself laugh and I have to try to control myself!

“But of course the audience loves that, and this is the play in which you can get away with it. I wouldn’t allow myself the indulgence of doing that in a straight play, but you can do it here and the audience feeds off that spontaneity.”

Of course, there must be extra pressure when starring in a production with so much emotional (and financial) investment attached to it, given Kenwright’s involvement…

“There’s always extra pressure. Don’t get me wrong, I have worked with Bill for 20 years and he tends to employ the same people, but there is pressure because I don’t want to go out and work on something that loses him money. But I am confident in Fallen Angels because it is a crowd pleaser and I know we have got it right.”

Whilst Seagrove enjoys filming and hopes to do more TV work, she stresses that “theatre is my big passion and always will be.” She is loathed to be without the incredible connection between audience and actor that the stage inspires.

“The audience is right there and the gratification is immediate, but it’s also to do with being able to control your own work. When you work in film and television, the director and the editor have control. When you are on stage, you are in control, you and the other actors.”

Outside of the theatrical world, Seagrove displays a passion for animals. The actress was recently the recipient of an award for her work with Mane Chance Sanctuary.

“I am a passionate advocate of animal welfare and two years ago my friend who ran an animal sanctuary ran into trouble and went bust, so I thought I would start a charity to help. Little did I know how completely overwhelming it would be, but I have taken it over and we now help sick and special needs children as well. Help us, help them – it’s a healing circle. What started as a saviour because I love animals has become something really beautiful.”

Of course, it would be remiss not to mention Everton, the third passion in Seagrove’s life. It’s all going quite well, isn’t it?

“It is, and I go to all the matches when I am not working. I was a football fan before I met Bill but now I am a raging Evertonian, a force to be reckoned with. How could I not be? I had to join the party.”