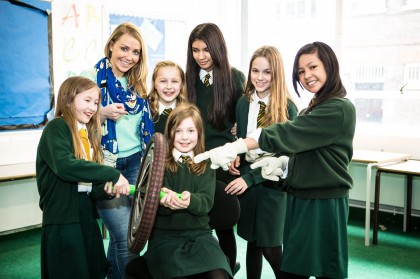 New research commissioned by BAE Systems and the Royal Air Force reveals that a quarter of British parents (24 per cent) say their children find science a difficult subject to learn with 24 per cent saying their children think it’s “too much like hard work” despite almost half (44 per cent) of them wanting to pursue a science-based career. Just three per cent want to be a TV presenter.

According to parents one in six British children (15 per cent) would like to be a computer game designer, over one in ten (12 per cent) want to be a scientist and six per cent a pilot. Unfortunately a third of those parents polled (33 per cent) think that their child doesn’t realise that their chosen career might be impossible to pursue if they give up science at school.

The study conducted by YouGov(2) asked 1,000 parents of children aged 5 to 18 about their children’s career ambitions and attitudes towards school subjects and reveals that other popular career choices where science is needed include doctor (nine per cent), inventor (seven per cent), architect (six per cent), forensic scientist (five per cent) and astronaut (four per cent).

Despite qualifications in science and an understanding of physics in particular being essential for these jobs, a quarter (24 per cent) of children can’t wait to give up science as soon as they are given the option to do so with 24 per cent finding it difficult and one in five (19 per cent) citing it as boring.

One in five parents (20 per cent) agree that their children struggle to see the relevance of science to their daily lives. This is despite the fact that the average British child comes into contact with numerous gadgets or innovations that would not exist were it not for physics, including iPads, noise-cancelling headphones, smartphones, dual cyclone vacuum cleaners and electric cars every day. Astonishingly, 65 per cent of parents agree that their child probably does not understand the science behind these gadgets.

The findings also reveal some interesting attitudes among parents themselves with 48 per cent saying they wish that they had paid more attention in physics lessons and 32 per cent believe that they could have pursued more interesting career paths if they had been enthusiastic about the subject at a young age.

The results of the research were released to mark the launch of the ninth annual BAE Systems and Royal Air Force Schools Roadshow at St. Marylebone C of E School in London which this year is themed around physics. The Roadshow is invited by teachers to schools across the UK and aims to inspire around 25,000 pupils about science, technology, engineering and maths (STEM) subjects every year. The Roadshow delivers an energetic and interactive theatre show to pupils.

Nigel Whitehead, Group Managing Director at BAE Systems said: “Quite simply the UK needs more people to study physics. We’ve got to do more to link up the most exciting careers – like being a pilot – with physics. The subject opens up opportunities to so many careers but there is no doubt that it does get difficult. This is where industry and organisations like the Royal Air Force can help teachers show the application of physics in the real-world and encourage young people to keep studying.”

Group Captain Mark Heffron at RAF, added: “The Royal Air Force encourages young people who are STEM competent and is keen on them looking to us in terms of a possible career. Projects such as the RAF/BAE Schools Roadshow can help to inspire students to continue with key subjects such as physics and maths and in so doing ensure they retain the widest possible range of future options. This show demonstrates that subjects such as physics are not only relevant to everyday life but can be a lot of fun and help in the future.”