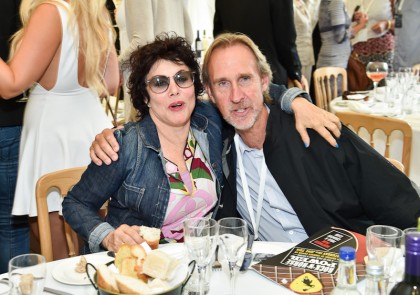 Models, actors, comedians and rock-stars graced the pitches of the Hurtwood Polo Club on Saturday,  June the 14th as they rallied together at the Rock ‘N’ Horsepower event in aid of Prostate Cancer UK.

Sponsored by Opera Jet, Kenney Jones hosted the event to raise awareness for prostate cancer after being diagnosed in Summer 2013. Celebrities such as Jane Seymour, Paul Young, Penny Smith and Ruby Wax all added to the dazzling display of the day. It was a glamorous affair entailing a champagne reception, lunch and a riveting polo match. But horsepower was revved up here in more ways than one. As well as some word-class polo there was also a chocolate box of super cars on display, ranging from a 275 GTB Spider to a 360 Modena.

After a day of sport and sports cars, the guests were treated to an amazing live concert with Kenney Jones’ rock-star friends rallying to the cause. Huge acts such as The Who, Mick Hucknal (Simply Red), Procul Harum and of course Kenney Jones himself finished the energy-filled day with a bang. ‘Shooting Stars’ Vic Reeves and Angelous Epithemou hosted the show and kept a steady pulse of comedy going through out the evening whilst also underlining the more serious message of cancer awareness.

Overall, the day was an exhilarating celebration of sport, music and fast cars, all great components to attract a lively and A-list crowd. Added to that, a charity auction took place and raised an astounding 10,000 pounds for Prostate Cancer UK.