Choir rocks up the London Stock Exchange with Song! 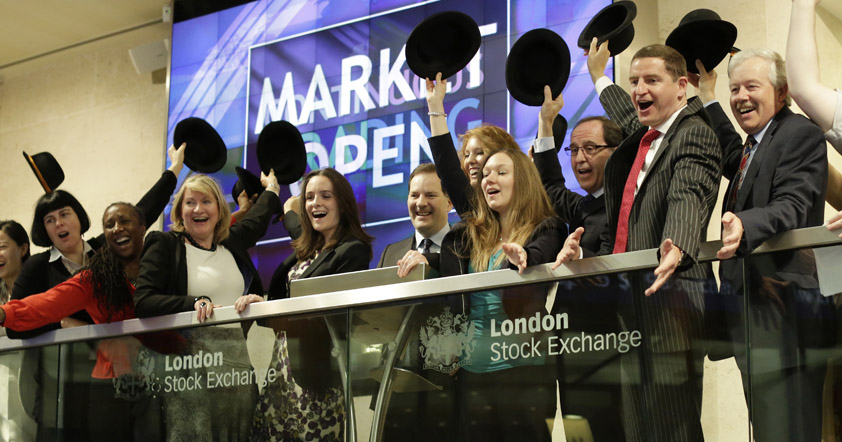 The City of London Festival opened trading on London Stock Exchange with a song, for the first time in history. A combined office choir, featuring singers from various City organisations including the Bank of England, sported bowler hats to sing ‘Let’s Go Fly a Kite’ from Mary Poppins to bring in the opening bell.

Outside London Stock Exchange in Paternoster Square is the Festival’s ground-breaking new iconic theatre in the shape of a bowler hat. This inflatable pop-up venue is presenting a diverse programme for a wide audience, from families to financiers. Standing at over 10 metres high – the equivalent of 3 storeys – the bespoke Bowler Hat is playing host to more than 100 events, including children’s theatre, cabaret, comedy and circus. The structure will seat 212 people, allowing audiences to enjoy renowned performers in an intimate space.

The festival is entering an exciting new era under the directorship of Paul Gudgin, who saw the Edinburgh Fringe Festival double in scale during his 8-year tenure as Festival Director. This summer the 52-year-old City of London Festival is animating the Square Mile in .new and exciting ways, enjoying a new lease of life.

Once again, the Festival features an innovative, eclectic programme of music, dance, spoken word and street performance. It will also be a celebration of the City, its architecture, skyline and streets, and its energy, stories and relationships with the rest of the world.

Over its 52 years, the Festival has brought the world’s finest artistic talents to the Square Mile, commissioned and premiered artworks, animated remarkable spaces not normally open to the public, welcomed children to its annual Parade, placed pianos on the streets of London, and hosted stimulating debates and discussion.

Highlights this year include:

·         Jazz with a View: Unrivalled vistas with world-class jazz

·         Justice, Money, Power: Curated by cultural commentator Tiffany Jenkins, this series of lectures, debates and interviews will focus on the financial, political and ethical implications of life in The City.

·         Seoul in The City series: the City will be animated by Korean artists including: Conductor Myung-Whun Chung with an Anglo-Korean performance of Beethoven’s Symphony No 9 – a symphony of reconciliation featuring Korean soloists, conducted by a South Korean artist who has worked hard to create dialogue with North Korea (15 July); pianist Sunwook Kim will give a recital in the Stationers’ Hall. (25 June); Yohangza Theatre Company will perform Shakespeare’s Hamlet in Korean, with traditional Korean costumes and music (12 July).

·         Nicola Benedetti performs traditional Scottish music ahead of the Commonwealth Games in Glasgow, with an all-star line-up of Scottish traditional musicians in the Guildhall (14 July).

·         Masonic jazz in a hidden temple in Liverpool Street: Julian Joseph performs music by a mason, Duke Ellington, in the extraordinary setting of a masonic temple in the Andaz, Liverpool Street ­–  walled off for decades but rediscovered during a 1990s refurbishment (11 July).

·         WW1 themed recital, structured round the story of a voyage to the front, with tenor James Gilchrist and pianist Iain Burnside, performing forgotten poetry and music by FS Kelly, William Denis Browne and Rupert Brooke, in Drapers’ Hall (23 June).

·         Simon Callow in a theatrical exploration of Beethoven with The Academy of St Martin-in-the-Fields at the Lord Mayor’s residence, Mansion House (30 June).

·         Over 100 free events animating the City and its surrounding green areas, including City Beerfest in Guildhall Yard (3 July),  live folk music in Epping Forest (6 July), plus steel orchestras, playful sculptures and trolley-dancing at venues such as Devonshire Square and the foot of the Gherkin.

“The City of London Festival, is an innovative initiative which will generate additional energy in the City’s streets over the next month and showcase some of the UK’s best music, dance and spoken word performers. The events will celebrate the City’s unique heritage, in which London Stock Exchange has a significant role to play, sitting at the heart of the City’s financial markets for now over 200 years.”

“The Festival looks set to show everyone that the Square Mile is not as square as they think, and it’s particularly exciting to see so much singing in this year’s programme. I would be surprised if any other part of the UK had formed so many choirs! For the next three weeks it will be wonderful to hear the City come together in harmony and celebrate this extraordinary location and its rich culture.”

“Festivities have begun! It is an immense privilege to curate a festival for a location as exciting and enthralling as the City of London. We invite everyone to take a new perspective of the City and experience its tremendous capacity for surprise and discovery – whether at the top of a skyscraper in the company of Britain’s leading jazz musicians, or by following the annual children’s street parade, whether in a hidden masonic temple, or in St Paul’s Cathedral. Our new pop-up venue, a giant inflatable bowler hat, is announcing loud and clear that it’s festival time. Plenty of events are free, so we welcome all comers in the City this Summer.”