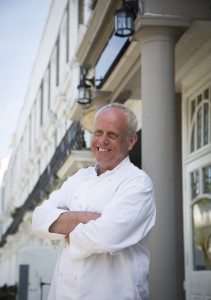 The New Angel is the latest restaurant from Michelin-starred chef, restaurateur and author John Burton-Race, and marks his return to London after an absence of 12 years.

New Angel Restaurant has also been announced as official Restaurant Partner for the 4th annual National Reality TV Awards 2014. The awards show which takes place on the 22nd of September 2014 will see attendees including ; Executive Producers, Directors, and VIP’s attend to celebrate a successful year in television. New Angel Restaurant will be sponsors of the Best Production Company category with nominees including ; TalkBack Productions , Boundless , SunDog Pictures , Endemol , RDF ,Objective Productions
Wall to Wall , Two Four . The winners voted for by the public will be announced at the prestigious event taking place on the 22nd of September 2014.

The restaurant opened in May with John Barton Race is the chef patron, Stephen Humphries is the head chef and is already receiving rave reviews from customers and press.