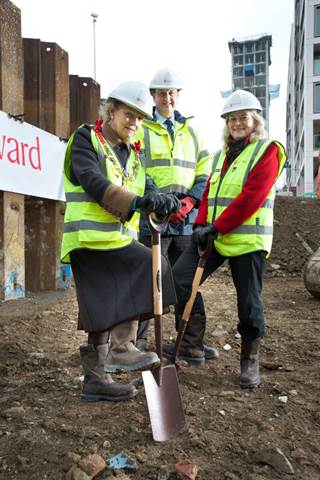 Building work on a major new primary school for London has been marked by housebuilder St Edward and the Mayor of the Royal Borough of Kensington and Chelsea during a ground breaking ceremony held today (Tuesday, 2nd December 2014).

The Mayor, Maighread Condon-Simmonds and Cllr Joanna Gardner of Abingdon Ward of the Royal Borough dug the first ground today bestowing the start of the construction project which will create a four storey tall school for more than 200 pupils.The new Warwick Road Primary School which is being developed by St Edward as part of their major regeneration project in Kensington, is due to complete in just under two years.Four storeys high, the school will provide ample space for state-of-the-art classrooms, a wildlife garden on the second floor and will boast a large roof-top play area and garden with seating, all safely enclosed by a high wall that also provides areas of cover from rain or sun.The school has been expertly designed by Squire and Partners to provide teachers and pupils the space and facilities they need to provide first class teaching to the borough’s children. As well as a rooftop garden and play space, the school will also come with a separate garden area, specifically designed to allow for quiet play time, encouraging outdoor reading and the growing of plants.Plans for the school also include a multi-use games area, built at basement level, to accommodate a wide range of sports activities such as football and netball, which will be available to the wider community after school hours. A dedicated viewing gallery accommodating spectators, cheering pupils and parents alike will also feature as part of the sports facilities.

The school will create a number of jobs during the construction phase including new apprenticeships for budding property professionals.

Paul Vallone, Executive Chairman, St Edward, said: “This is an important milestone for the growing community at 375 Kensington High Street and the wider area, who will benefit from a brand new school for children in the borough.”

Located in the Royal Borough of Kensington and Chelsea, 375 Kensington High Street is part of the Warwick Road Masterplan which is one of the largest regeneration projects in this part of the borough. When fully complete the masterplan will comprise more than 1,000 new homes, public linear park and landscaped garden squares.Located adjacent to a new public linear park, which will also form part of St Edward’s development on the site of Kensington’s new address, 375 Kensington High Street, the school will be visible from the High Street and will stretch along Warwick Road. The School and nursery will provide a key local community resource for both the existing community and those moving into the development.

As well as enhancing the sense of community across the development the school will also provide crucial new school places in an area that is consistently seeing a high demand for new homes.When built, the school will complete the vision set out by the Royal Borough of Kensington and Chelsea and St Edward as part of a wider regeneration project, the Warwick Road Masterplan, which was designed to breathe new life into this corner of Kensington.

The school is anticipated to be complete in 2016.

Tags :Chelsea Magchelsea monthlyCllr Joanna Gardner of Abingdon WardfeaturedMaighread Condon-SimmondsMayor of ChelseaMayor of the Royal Bourough of Chelsea and South KensingtonPaul Vallone
share on Facebookshare on Twitter
add a comment