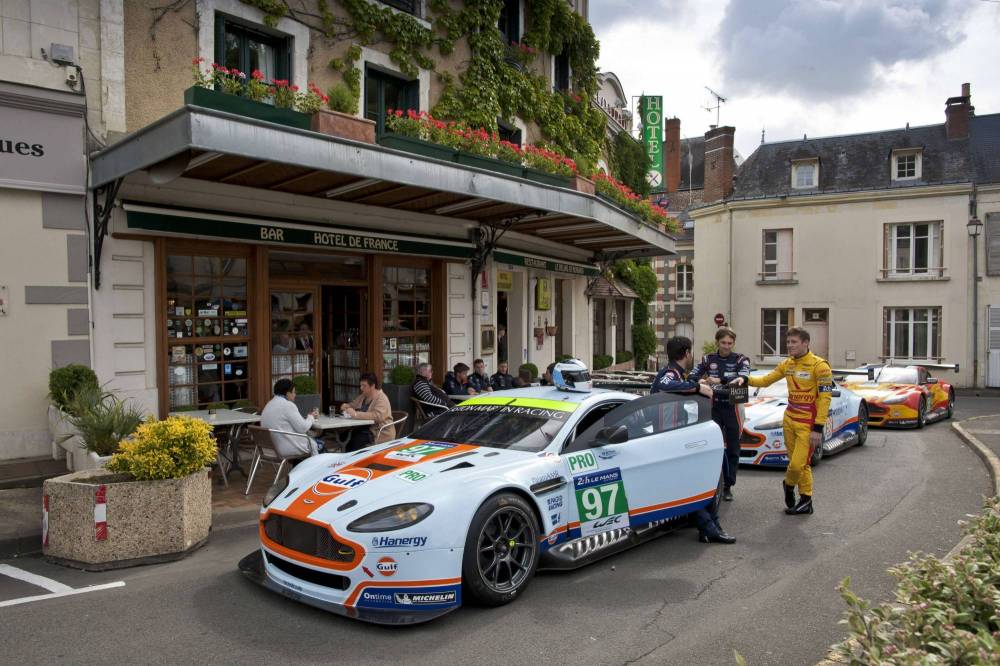 From 1953 until 1963 the Hotel de France at La Chartre-sur-le-Loir was the base of the Aston Martin team for the 24 Hours of Le Mans. Drivers and mechanics would prepare their cars in the hotel&rsquo;s courtyard and then drive them on public roads to the famous circuit &ndash; now history has repeated itself.

After two days of testing at the Le Mans circuit, three of this year and Aston Martin Racing V8 Vantage GTEs and their drivers, Darren Turner, Richie Stanaway and Mathias Lauda, recreated some of the famous photographs and film footage from the 1950’s.

The Hotel de France in  association with motor sport and the Le Mans 24-hour race started when John Wyer, a hard-nosed straight talking Aston Martin team manager, discovered it in 1952 and then based his teams there.

Every year hundreds of local people and motorsport enthusiasts would gather in the small French town to catch a glimpse of the cars and see them leave for Le Mans, filming and taking photographs of the drivers and cars.

In 1959, the hotel saw its first victory party, the first of many, when the Aston Martin DBR1, driven by Carroll Shelby and Roy Salvadori, won the race for the Aston Martin team managed by the legendary Wyer.

Since then, many teams have used the hotel, which has become a mecca for motoring enthusiasts from around the world, but the Aston Martin team had never been back.
Last week saw the cars leave the famous hotel before returning to Le Mans to prepare for this year&rsquo;s race, which takes place on 13-14 June.

Martin Overington, owner of the hotel, which he purchased and refurbished last year, said: “This is one of the biggest events that has ever taken place at the hotel. It is literally history repeating itself and we are delighted to be welcoming the racing cars, their drivers and of course David Richards, the Chairman of Aston Martin Racing”

David Richards, Chairman of Aston Martin Racing, said: The  Hotel de France is an important part of Aston Martin’s  motorsport heritage, having been the team and Le Mans base for many years in the late 1950s, including 1959 when the team won the 24-hour race. This year, we wanted to recreate the nostalgia of those days, when the racing cars had their final preparations alongside the hotel before being driven some 40km to the circuit along public roads.

The Aston Martin Racing team will have a five-car entry at Le Mans this year, equal to its largest ever entry two years ago. Three Vantage GTEs will compete in in the GTE Pro class with two in GTE Am.   Aston Martin Racing is the reigning GTE Am champion and is looking to both retain this title as well as taking Pro honours too.

Le Mans is also round three of the FIA World Endurance Championship and Aston Martin Racing is currently leading the GT Manufacturers and championship. With Le Mans counting for double points, a good result is important if the team is to keep on course for its first coveted WEC Manufacturers title.  When asked by Chelsea Monthly, what the prospects of double points will be.. Their response “Watch this space”.  Classic!