A taste of Italy in London 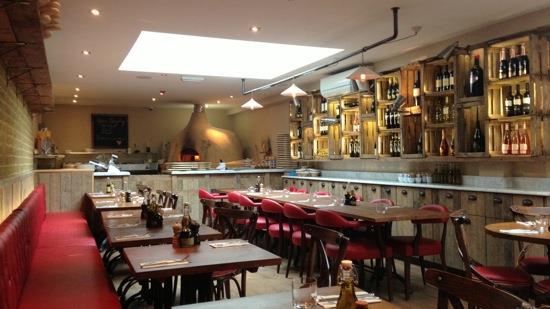 Introducing Cacciari’s who have two unique restaurants situated in both Brompton Road and Pembroke Road. We decided to pop down to the Pembroke Road offering to find out what makes this family restaurant stand out from all the others.  Upon making my way into the dinning space, the interior was a mix between traditional and contemporary.

The open planned set up enables for a socially communed environment leaving guests feeling like they are in an idyllic home away from home experience at the heart of the city.

The menu comprised of traditional Bolognian cuisine including classic Piadina, fresh homemade pasta (made in the restaurant basement by mother of co-owner, Marco!) and wood-fired pizza.

Great service, great food and what was most outstanding is the quality of their ingredients which  i was told  70% of it was sourced from Italy’s food capital: the Emilia Romagna region in Northern Italy. For those who remember we covered the region a few years ago (Read Chelsea Monthly goes to Emilia Romagna).  Emilia–Romagna today is considered as one of the richest and most developed regions in Europe and has the third highest GDP per capita in Italy. Bologna, the region’s capital, has one of Italy’s highest quality of life and has highly advanced and modern social services. Emilia–Romagna is also a major cultural and touristic centre, being the home of the oldest university in the Western World, containing numerous Renaissance cities (such as Modena, Parma and Ferrara). A major centre for food and automobile production (Emilia–Romagna is home of numerous iconic gastronomical and automotive industries, such as Ferrari, Lamborghini, Maserati and Ducati) and having a lively and colourful coastline, with numerous tourist resorts, such as Rimini and Riccione.

So, why not pop down to Cacciari’s for your own taste of Emila Romagna on home turf!