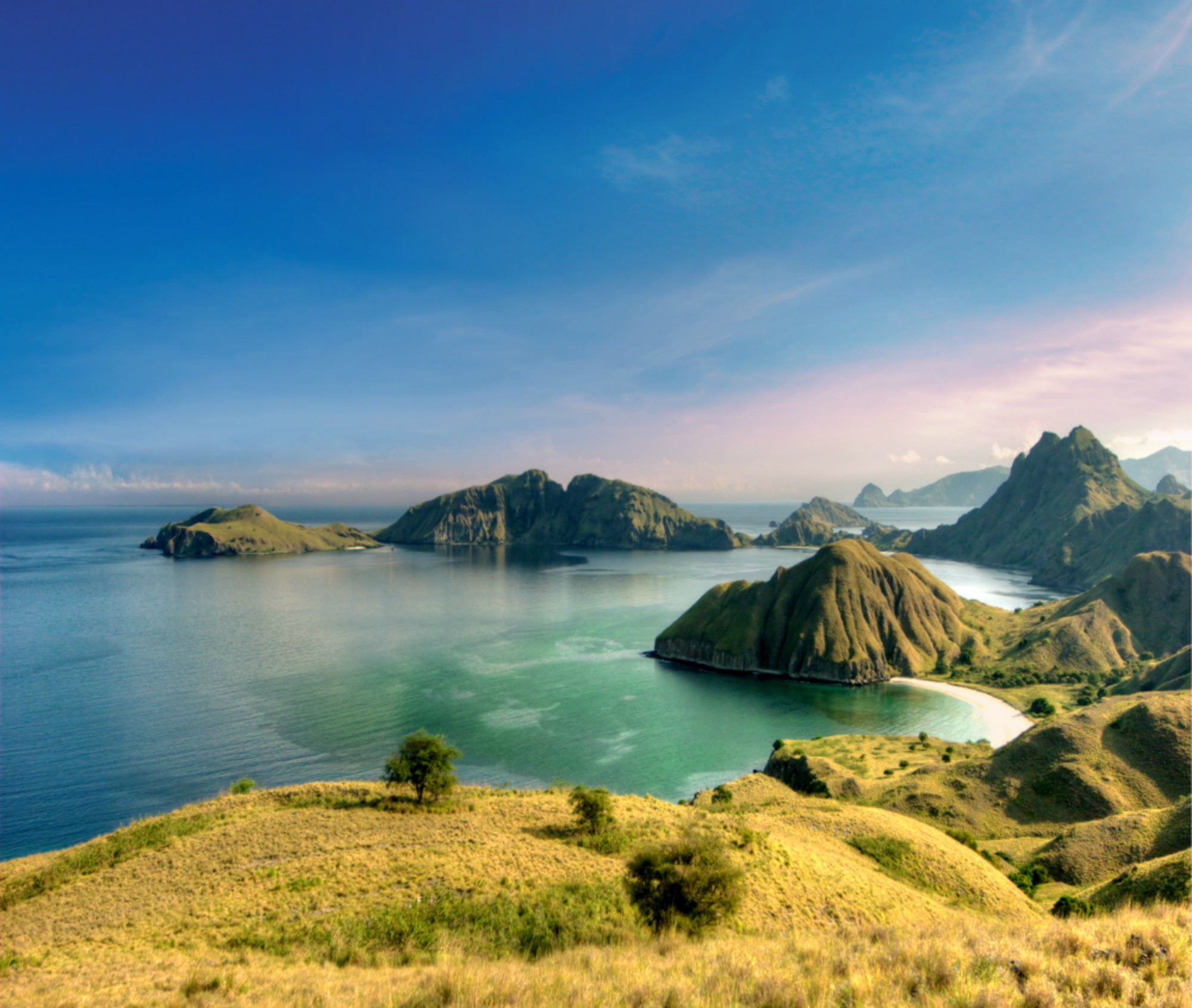 “So when are you off to Bali?” was the response I usually got when I said I was going to Indonesia. Out of more than 17,000 volcanic islands – over 900 of which are inhabited – it’s only one that’s really made it into the mainstream.

But believe it or not there’s life beyond the honeymoon haven, and it was with more than a hint of smugness that I set off to escape the crowds and explore this other side – in the form of Java, Flores and Komodo Island, three incredibly distinct isles which float like humpback whales in the heart of the archipelago.

I was on an expedition with Panorama Tours, and after an easy 12-hour flight over to Jakarta from London, we hopped across to Yogyakarta, Jakarta’s smaller, less industrial sibling. Thanks to new non-stop flights to Jakarta with Garuda Indonesia it was a lot quicker and easier than anticipated, and I felt like we’d only just jetted off when we started touching down.

Getting cultured in Yogyakarta

The cultural capital of Java, this is a city where age-old traditions are guarded with unwavering reverence, where the soothing, percussive sounds of the gamelan greet you almost everywhere you go, and where Batik t-shirts and table cloths – created using wax and dye in a way they were centuries ago – fill the streets with vibrant colour and energy.

Among its biggest attractions is the Sultanate’s palace, built in the 18th century. Our visit to the grounds began with a traditional Javanese dance made up of slow, elegant movements to an accompaniment of dream-like music, and although the grounds were surprisingly modest, the royal gardens nearby were spectacular, centred around a bright blue pool and cream, colonial-style architecture.

It’s not just the artistic heritage and architecture which give the area its appeal, of course. Java is known throughout the world for its coffee, and among its most treasured is Pawon Luwak, whose headquarters lie in the form of a tiny, hole-in-the-wall style coffee shop 40kms outside the city (and close to the famed Borobudur temple). This is no ordinary coffee; it’s formed from wild coffee berries excreted by the wild luwak creature -which means it’s basically roasted excrement. As one of the most expensive and rarest coffees in the world it’s known for its quality and taste – think bitter, marmite-y flavours and a distinctive, arabica aroma – and the cafe is well worth a visit, even if drinking the stuff doesn’t sound too appetising.

It was the Borobudur temple which really shone here, however; located in the Magelang region, it’s the largest Buddhist monument in the world, a towering collection of bell-like structures – ‘or stupas’ – dating back to the eighth century. At that time Buddhism was still the main religion, and Islam and Christianity, which now make up the island’s faith, hadn’t yet been brought over.

The best time to see this extravaganza is at sunrise. A 4am wake-up call led to us doing exactly that, and I’m glad we did; think rows upon rows of stones shaped like iced gems, silhouetted against a red sky of fire made all the more dramatic by bright, fluffy yellow clouds. Draped in a thick sheet of mist, the whole scene was filled with mystique, intercepted only by a volcano (Mount Merapi) in the distance and its still plume of smoke. And, unlike at Angkor Wat, there were only a few others around; it was silent bar the distant coo of cockerels. I didn’t think we could beat that sight, but I was quickly proven wrong. Later that day we took a horse and cart tour round the nearby village of Candirejo, galloping past bright green papaya trees and giant banana leaves and exploring several community projects, from cassava chip-making to gamelan-playing (at which I was predictably terrible).

The five-star Plataran Resort and Spa made an excellent base for exploring both of these, and I can’t recommend it highly enough; the villas themselves were as stunning as the green, mountainous surrounds, and we had our own private pool overlooking the sweeping jungle views. You can hire bikes to explore the area; we did, and were greeted with warm, welcome smiles from local villagers alongside ‘bah’s from the roadside goats and squawks from the waddling chickens.

Of course it would have been sacrilege to leave Java without getting a massage – it’s normal for locals to have one every week, according to our guide Eko – so we ended our explorations here with one. It’s safe to say this was a memorable experience, consisting of some shock-inducing foot slaps and slightly painful toe clicking, but when it finished I left feeling completely relaxed – and ready for our onward flight to Bali (a transfer point for Flores).

Flores, specifically the town of Labuan Bajo, is known largely as the gateway to Komodo Island, but this former fishing village is worthy of some time in itself. We ventured over to the beach there the following evening and discovered one of the best sunsets I’ve ever seen – swathes of bright pink, red and orange, all perfectly reflected in the sea, took over the whole beach, and I felt like I’d stepped inside an impressionist painting. That’s until the plates of food came out – king prawns, grilled fish and flavourful meat dishes, and I was swiftly plopped back down onto earth (we ate at Atlantis On the Rock, part of the Plataran resort, and it was one of the best meals of the trip).

But Komodo Island was hands down the highlight; after a two-hour speed boat ride filled with awakening gusts of wind and fistfuls of salty ocean spray, we arrived, and within two minutes we’d already spotted our first beast.

Admiring its black claws scraping around like unwashed fingernails, scaly skin wrinkling in folds and small, black beady eyes staring out from the side, I felt a little unnerved, but it was hard to believe this creature – sitting rigidly without the slightest sign of movement – was the world’s most ferocious lizard.

But ferocious it is; unique to Indonesia, Komodo dragons, which reach up to 3 metres in size, eat their own eggs and have little problem with eating each other in a fight, our guide told us. Camouflaged against the dusty, barren surroundings, they wait for their prey to approach them unknowingly and snack on the likes of deer and buffalo. They devour up to 60kg and live off of it for the next few weeks, and their saliva is so poisonous it can kill a human in the space of a few hours.

All of this wasn’t quite what I wanted to hear as I sat crouching a metre away posing for a selfie, a string of saliva protruding from its large mouth, but I live to tell the tale. And after a two-hour trek spotting a further seven of the dragons, accompanied by the constant, dry hiss of crickets, we departed for pink beach. Here the sand is vaguely rose-tinted at the edges, but it’s the water – deliciously drinkable, the colour of blue curaçao – that holds the most appeal. Snorkelling off the boat, I spotted bright blue starfish, multi-coloured schools and huge clumps of pale pink coral, and it was with more than a hint of sadness that we headed back to base.

But I didn’t have to worry about getting bored; our final stop was Bali, where we pitched up to Katamama – a new, edgy, boutique hotel plonked in the heart of fashionable Seminyak, where paperback books are scattered across high tables, chill-out music plays from the speakers and cool, wooden decor fills the interiors. My room had a mini-bar complete with cocktail-mixing recipes and equipment – enough said.

Seminyak itself had plenty to offer, including high-end beachfront restaurants like Alila, where the soft shell crab, served against a backdrop of exotic, crashing waves, was exceptional. The nearby Potato Beach Club is worthy of a visit too – drawing in a young, cool crowd from across the region with tropical cocktails and pumping music day and night, it’s the type of place where you’ll end up staying a lot longer than you planned (you’ll also need to book a ‘bed’ – AKA table – in advance). But I couldn’t help feeling a little nostalgic for the authenticity of Java, the peace of Flores and the wildlife of Komodo. There’s no denying that Bali is beautiful, but for a taste of real Indonesia it’s worth venturing further afield too – even if that does mean drinking coffee made with regurgitated beans and coming face to face with the world’s most dangerous lizards. But let’s face it, where else  in the world can you do that?

Panorama can accommodate tailor-made programmes to suit various budgets, including stays in the hotels mentioned.