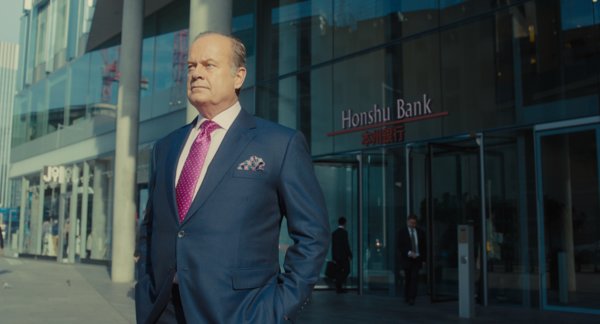 He is an English film director and executive producer. He first came to public attention as a director when Leon the Pig Farmer won him the FIPRESCI International Critics’ Prize at the 1992 Venice Film Festival, the Best Newcomer award from the London Critics’ Circle and the Chaplin Award for the best first feature from the Edinburgh International Film Festival. His new film Breaking the Bank which features legendary actor Kelsey Grammer is nominated for the prestigious 3rd annual National Film Awards UK. We caught up with Vadim Jean ahead of the awards show taking place in London on the 29th of March.

How did you get your first break into the motion picture industry?

I was a runner on Mike Figgis’ first film, ‘Stormy Monday’ starring Tommy Lee Jones and Sting, which mainly involved driving a clapped out minibus up and down the M1 from Newcastle to London and back with everything from camera equipment to a Polish jazz band (with their instruments).  My finest moment was the van breaking down right in the middle of Waterloo Bridge roundabout at 5am in the morning after the tie I had used as a temporary fan belt gave up the ghost.

You are best known for your debut Leon the Pig Farmer. So what made you delve into the world of finance with Breaking the Bank ?

I’ve enjoyed directing comedy and it seemed to me that it was about time the bankers had a humorous stick poked at them.  I’ve always wanted to make an Ealing style, old school comedy and Breaking the Bank seemed the perfect vehicle to make my homage to Ealing. From the score to the old Rolls Royce driving past the Bank of England and the imagery of the Tower of London the loving nods are all there in the film.  I also didn’t really understand the 2008 crash so now, thanks to script writer Roger Devlin’s insider knowledge of banking, I do understand about as much as many bankers.  Which is not necessarily that much…

Kelsey Grammer plays  Charles Bunbury in your movie.  With Grammer having such a huge legacy. What was it like having your work brought to light by such an accomplished actor?

It’s the second movie Kelsey and I have done together and we’d been trying to work together ever since the first one so, this was a joy.  We have a real short hand with each other.  He really can play anything.  I thought he might need a dialogue coach to play Charles Bunbury, who is quintessentially English, but after about three minutes of the read through we sent the coach home.  It’s hard to believe the man who played the monstrous mayor of Chicago in ‘Boss’ can also play bumbling Charles Bunbury.  We’re looking for the next thing to do together already.

Now, you have just been nominated for this year’s 3rd annual National Film Awards UK which is fantastic as all nominations and voting are left for the public which makes it fairer than  other traditional awards ceremonies. How did you feel when you got the news that Breaking the Bank was nominated for Best Comedy?

The movie industry is fast changing with the rise of Netflix, VooVix and other similar platforms . Do you feel the cinema industry has had its day or do you believe the experience of going to watch a film still resonates amongst movie fans worldwide?

Wherever we’ve played our film in the world to a cinema audience it’s been received with lots of laughter.  Even the French laughed.  A lot.  The ‘theatrical experience’, especially with a comedy that works, where laughter is the shared experience of the audience, will never lose its great pleasure.  If it did, theatre would have died years ago.  So while the audience is finding films on a plethora of platforms now, there’s still nothing quite like being captivated by the flicker of light projected in a dark room and sharing communal laughter in front of the big screen.

What would you say is your Top 5 Best Directors of all time?

Tough question.  There are so many but I will list my favourites, not necessarily in this order:

Top 5 Best Actors/Actresses you would like to work with in the future?

Geoffrey Rush (we have plans)

Where would you see yourself and company Mob Film in the next 5 years?

Still directing films I care passionately about but that also find an audience and transport them to the emotional places to which only cinema can take you.

Why should our readers watch and vote for ‘Breaking the Bank’ at the National Film Awards UK ?

Breaking the Bank is a deliberately old school, very British comedy; so if that’s your cup of Earl Grey then it might tickle your funny bone; Tamsin Grieg, Mat Horne and of course Kelsey, give such great comic performances they’re worth checking out especially if it didn’t come across your radar when it was released.

To vote for Breaking the Bank as the Best Comedy at the 3rd annual National Film Awards UK . Click Here