According to latest research, eggs have much to be ‘egg-static’ about this Easter, as a third (31%)of Brits admit they prefer to reach for traditional soft boiled eggs over their chocolate equivalents.

Results of the study commissioned by the happy egg co., also found that, as a nation of foodies, there is great variety in how we tuck into our soft boiled eggs. Gone are the days where we stick to traditional toasted soldiers for dipping. Brits are now opting for: crispy bacon, asparagus, croque monsieur, chips, pigs in blankets and even fish fingers. Eating behaviours have also advanced, ranging from new found methods such as peeling the shell and smashing on toast to, right through to creating ‘yolk spread’ (spreading the yolk on toast), and even using the yolk as a pouring sauce. 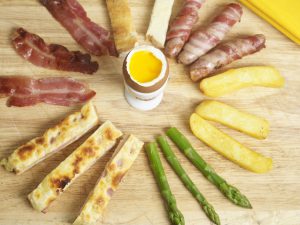 How we eat our soft boiled eggs can even provide some revealing clues about our personalities. Human behaviour expert, Dr Jane Cox has been analysing soft boiled egg eating behaviours and is able to attribute different personality traits to people depending on their egg-eating methods:

Human behaviour expert, Dr Jane Cox, who was involved in the study, commented: “The way that we eat is an expression of our individualism and can reveal a lot about our personalities. Your reliability, adventurousness, sensitivity or hunger for life may be seen in the way that you scoop, tip, or dip your way through the yolk.  Perhaps you’re a dipper, easy going and stable or a scooper, someone who doesn’t like to waste a moment of time.  A tipper reveals you have a dreamy gentle personality, and a smasher, unsurprisingly just gets stuck into life and enjoys every day.”

The trend towards traditional hen eggs at Easter comes at a time when egg consumption is booming as a result of recognised nutrition and health benefits, versatility, baking and a shift toward ‘brunch’ dates with friends. In the week of Easter alone, over 100million individual eggs are expected to be bought.