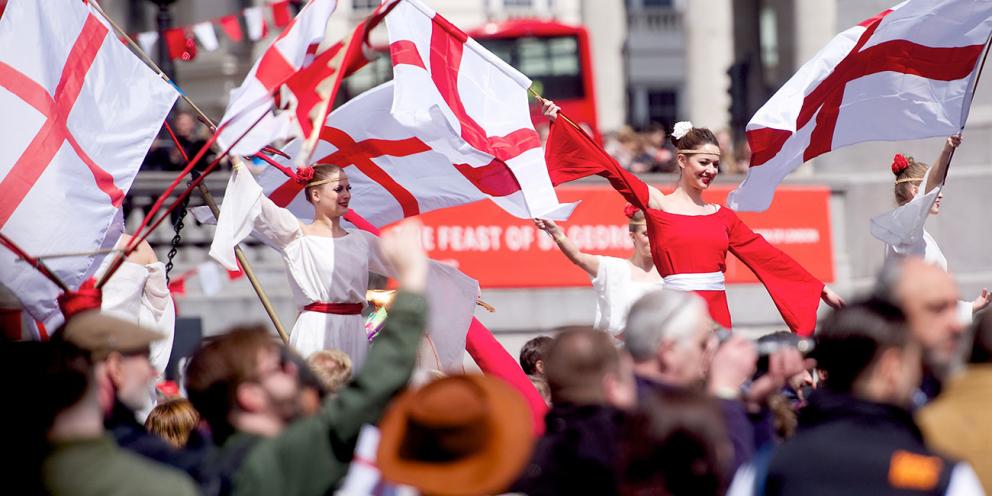 The Cross of St George has been raised outside City Hall from today in celebration of English history and culture as the final preparations are made for London’s biggest ever St George’s Day celebrations in Trafalgar Square this weekend.

Mayor of London, Sadiq Khan, said: “I’m proud to see the English flag raised outside City Hall this week in the lead up to the biggest ever Feast of St George celebrations in Trafalgar Square. St George’s Day is a great opportunity to celebrate our history of amazing culture, creativity and innovation that has helped shape the world – from the words of Shakespeare and Jane Austen to the ingenuity of Brunel and Tim Berners-Lee. I am proud to be doing more to celebrate this important national day.

“England has always been at its best when we both honour our past and embrace our future. For me, St George’s Day is about the phenomenal history of this country but also celebrating our modern diversity and the many different ways we can all feel proud to be English.”

The Mayor is also hosting a special exhibition at City Hall, which celebrates the capital’s history and heritage. The exhibition, I am London, reflects the diverse and multi-layered history of London, its people and the historic places that bear witness to the city’s past, present and future. Visitors can see the exhibition in City Hall or by The Scoop in More London until 28 April.

This Saturday (22 April), The Feast of St George – a vibrant event which celebrates the very best of English history, food and culture, will take place in Trafalgar Square. This year’s festivities promise more performers, activities and gastronomic fare than ever before.

The main stage programme includes performances by Crystal Palace Brass Band, indie folk band Patch and the Giant and choral sensation the Military Wives Choirs. Headlining the celebrations in Trafalgar Square is legendary folk musician Ralph McTell. One of England’s great musical storytellers, Ralph McTell is best known for his 1974 song ‘Streets of London’ – which earned him an Ivor Novello Award. In 2002, Ralph won the prestigious BBC Radio 2 Folk Lifetime Achievement Award and is celebrating almost 50 years on the road.

Also performing on the main stage in Trafalgar Square is Clarissa Mae, winner of the Mayor’s 2016 Busk in London competition for budding street musicians and Dat Brass, a hip-hop brass band who were winners in 2015. There’s plenty of dance to enjoy too, with female Morris dancers Belles of London taking to the stage alongside Folk Dance Remixed – a unique company that blends Maypole, Clogging, Ceilidh, Street, House and Breakdance with a hint of African & Bollywood. Vistors can also experience a Ceilidh Jam Workshop on the North Terrace of the Square. 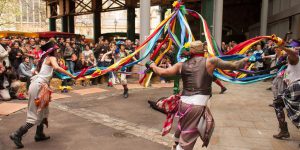 For budding chefs, there will be a Cookery Theatre, which will showcase the very best of English culinary traditions by top chefs including Theo Randall (River Café & InterContinental, London) and BBC Masterchef winner, Natalie Coleman.

This free event will also an English Food Market, featuring lots of stalls offering high quality English fare and a banqueting area, where visitors can enjoy performances from musicians on the main stage. The centrepiece of the festivities will be a colourful St George’s Dragon overlooking the Square. The market will offer everything from hog roasts to mouth-watering pies, to delicious cakes, tarts and meringues. There will even be a ‘London cab’ selling ice-creams and lollies. The majority of the food stalls are from Borough Market, local farms and winners of the British Urban Street Food Awards – celebrating locally-sourced English produce from the South East and London.

Families and children will enjoy the Magical Kingdom, which will feature magic activities and wizardry, including a ‘magical’ owl, fun fairground rides and children’s entertainers. There will also be a St George’s-themed Treasure Trail around Central London, highlighting the capital’s connections with England’s patron saint. Actors dressed as Knights and Ladies will give out clues to the public as they search for the Dragon’s name. The first 100 to meet the Dragon in the Square and know his name will be awarded a special ‘Treasure Trail’ token and be knighted by the King, who will sit alongside the mythical creature.

Visitors should also look out for performers reading Shakespeare’s sonnets, Jane Austen and Sherlock Holmes, court jesters, magicians, and iconic Pearly Kings and Queens as they make their way through the Square, entertaining the crowds.