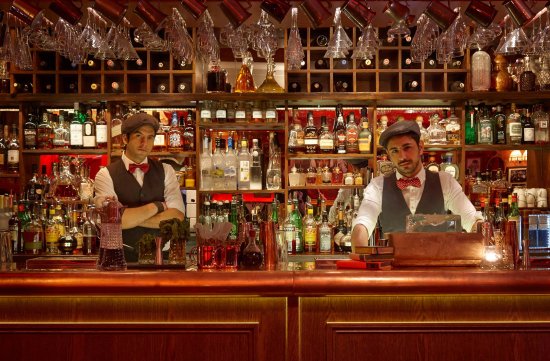 We arrived at the lobby of the Chelsea Cloisters apartment building on Sloane Avenue.  Members of this speakeasy bar have a card that buzzes them in, but non-members must know the password as we found out when we got there. Unfortunately, we didn’t get the memo as regards the password so chose to improvise instead. How? The name is Jeff Amstrong, not Bond and that seemed to unlock the Kingsman style secret door into a paradise of alcohol. .
Once through the door, you leave behind the luxurious corridor and enter another world similar to a backstreet style mysterious New York bar with a plethora of vintage radios and clocks stuck on the walls.
As soon as you step inside, you enter the made-up world of Uncle Bart, a notorious gangster in downtown Chicago. His story is clearly told in the bar’s comic-strip menu so it takes a little common sense to put it all together. I opted for the strongest cocktail on the menu and that too was a secret and to say it was ‘strong’ was an understatement.

Our Verdict:
Amazing location for a first date. Loads of surprises and you never know what Uncle Barts has got up his sleeves!!