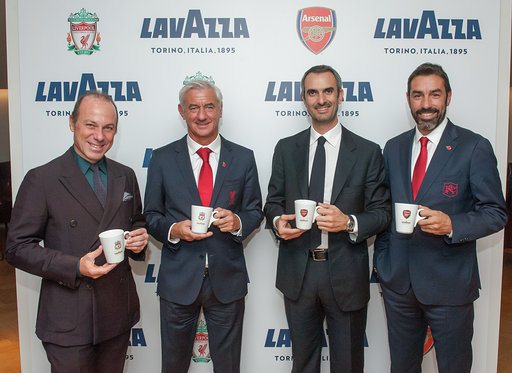 This week, we were invited to a press conference by Lavazza Group as they announced their exciting new partnership. Lavazza, the brand famous for keeping Italians and coffee lovers worldwide fully awake has become the official coffee partner for both Arsenal and Liverpool Football Club. The new partnerships will unite the excellence of authentic Italian coffee with that of English top flight football. I know you are wondering why Chelsea football club was not invited to the party.  A question I asked Vice Chairman of Lavazza Group,  Guiseppe Lavazza whilst sipping gently on a coffee infused cocktail… to which I found out that he was a firm Liverpool football club supporter whilst his cousin, on the other hand, is Arsenal through and through. Say no more!!! The family company has a long heritage of offering top-quality Italian coffee since its founding in Turin in 1895 – not long after the creation of both clubs: Arsenal FC in 1886 and Liverpool FC in 1892. Just as Lavazza combines its heritage, tradition and passion to create superior coffee experiences, Arsenal FC and Liverpool FC draw on these shared values to create outstanding results on the pitch. 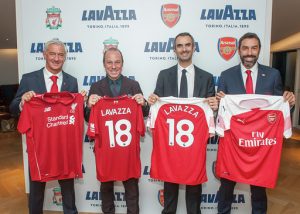 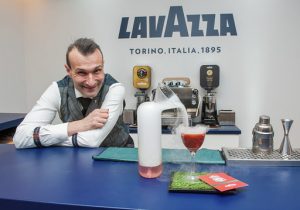 Over the coming three years, Lavazza will be the exclusive coffee supplier at both Emirates and Anfield Stadium. Lavazza’s product offering will include its new sustainable coffee blend for the food service segment, iTierra! Colombia, which will be available at c.150 boxes. This will be coupled with the premium single origin Kafa Forest Coffee which will be served in all VIP/player lounges and key points of sale within the stadiums.

Carlo Colpo, Lavazza Global Head of Marketing Communication, stated: “As part of our marketing strategy we are delighted to partner locally with Arsenal and Liverpool FC, two English top flight teams ranked among the ‘Top 20 most valuable sports brands’ in the world (Powa Index 2018). Two teams that share with Lavazza the same passion for excellence, innovation and tradition.” He added, “These multi-faceted partnerships will see select players from both clubs as protagonists of localised versions of the new Lavazza global advertising campaign, which will be premiered first in the UK market at the end of November.”

David Rogers, Lavazza UK Managing Director, comments: “At Lavazza UK, we are immensely proud to be further strengthening our presence in the United Kingdom through new partnerships with two of English football’s greatest teams. It is a move that allows us to reach consumers with our authentic Italian coffee experiences not only first-hand in the stadiums, but also through a multitude of other touchpoints year-round, potentially reaching tens of millions of fans.”

Lavazza has long been associated with the most prestigious sporting events. On a global level, the brand serves as the only food and beverage brand sponsor of all four tennis Grand Slams, which includes Wimbledon. Lavazza also partners in local markets with other premium events such as Royal Ascot (UK), the Mercedes Cup (Germany), and CHIO Aachen (Germany). Previous sports partnerships include the FIFA World Cup France 1998, the Italian Open (Golf) 2013 and 2014, and the World Ski Cup 1987 and 1989. What’s next? Perhaps the International Sports Awards? That will be an amazing partnership for the brand. What’s certain is that Lavazza continues to innovate it’s reach and access and with amazing partnerships such as these. The brand is set to become even much bigger in terms of presence in the years to come. Watch this space.