From Forex Trading to Philanthropy 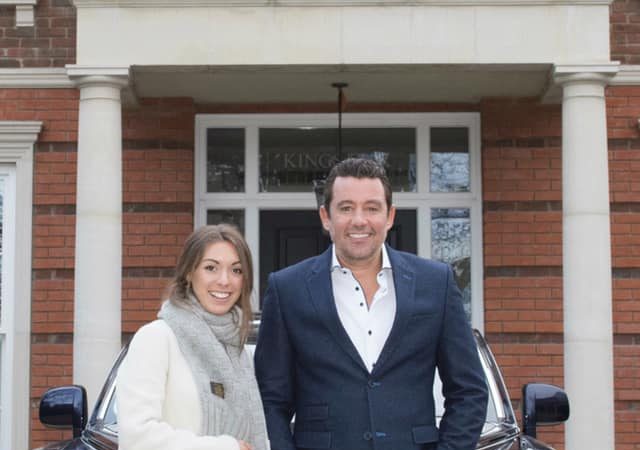 For  some you avid readers with amazing memories, you will remember we interviewed Learn To Trade, Forex , CEO Greg Secker last year for The Business Show (Watch here) .  As you can imagine, Greg and his partner Rachel are mostly occupied by a packed daily schedule of running the various Learn To Trade branches worldwide. So, when Greg decided to fly out  for his annual trip to Manila with Rachel for a break to get away from the hustle and bustle of London. He was unaware of what awaited him on the other side of a beautiful holiday. Greg visited a village he built from scratch and handed over to 586 beneficiaries last year, they were the survivors of typhoon haiyan.

The story goes….When Greg was in Iloilo 5 years ago to practically the same week (April 2014), doing the planning meetings for the 100 home village he was about to build, he met a very scared little girl, Fatima Barcemo who was in desperate need of surgery to remove a huge cancerous growth on her side . Without hesitation, he bundled her into a 4×4 with his mother and Rosario in toe, and drove “without delay” to the Iloilo doctors hospital, calling the chief surgeon on route, and requesting he perform emergency surgery. After a long night on the operating table, Fatima went on to not only survive – but seriously thrive and is a beautiful, confident young lady.

This time, almost 5 years later as he was doing his tour around  he  was shown the now established general store named after my middle son Zac, the plans for his eldest son Santi’s chicken farm  and lastly India’s bakery which is responsible alone for supporting 20 families. Whilst he was admiring the moringa plantation and the amazing beautification achieved by the villagers planting flowers in the streets of the village of their own volition, all named after important people in his life…He suddenly stopped and made his way down Rachel Street.   Greg commented “It was like I was being guided. I walked half way down, not stalling – guided – moving with purpose….until I reached the Gonzales household, a new family to the village. There I saw a little boy at the door and without hesitation I marched straight into their house (this is unlike me, I would normally at least knock – but not this time), what unfolded was the scene from the twilight zone. A dear little baby boy, only 3 months old, had been left unattended, on a bed, literally fighting for breath – with what immediately appeared to me to be series of very serious medical complications. His tiny body, was limp and weak – his skin was the tone of yellow and grey that could only be associated with serious liver malfunction resulting in jaundice..his head has swelled up to at least 2.5 times the size that it should be for his age and body length…surrounded by siblings who were all younger than 7 years old, this little boy was facing a very certain future and it didn’t involve being above ground…”

The very same feeling that swept across Greg 5 years ago, was with him again – but this time much stronger as he realised they had to act fast – there was literally no time to waste.

He later discovered that the child’s  mother had been advised to have the fluid build up on his brain, drained – but unfortunately like many families out here, and with no Public Health Service (a reality us Brits often take for granted) and limited and I mean seriously limited resources, they are left with no option but to watch their own children deteriorate into the grave.

They admitted Michel Gonzales to the same hospital which they took Fatima to, notwithstanding a brief visit to the emergency room at the local government hospital . The initial tests came back as expected – Michel’s condition is complicated, his outlook was looking bleak. There were rumours that his mother had attempted to abort the pregnancy, but these were unconfirmed. What was very real was the subsequent level of neglect, non-actioning of the previous doctors advice, the medications that weren’t taken and the state he was left in, unattended by a responsible adult.

Greg rallied his team and  put a plan in place to support her, her family and Michel .

“Should Michel survive the next few weeks – his life is hanging in the thread. It was a very long day, finishing at 3.30am, with Rachel nursing this little boy throughout the night and with me pulling hospital staff together with Rosario and fighting to get this little boy the help he needs”  Greg added.

He then turned his attention to the mother, who was very much disconnected – and quite vacant.

“Everyone has a story, and I don’t pretend to know hers, suffice to say she conceived the child with a married man and that relationship didn’t work out – and she needed support, love and guidance – Rose and I worked on and with her for many hours last night, and with Alya our social worker to put a plan in place to support this young mother”.

Michels road ahead is going to be a very tough one, should he even survive. They have identified the following (so far)
– acute hydrocephalus
– pneumonia
– liver malfunction
– gall bladder dysfunction
– cardiac arrhythmia
– the brain is underdeveloped, and a part has not developed
– endocrine disorder

“the doctors and surgeons kept telling me his future is in serious jeopardy for obvious reasons. As each hour passed, we uncovered more things – and the reality is, if you don’t have money out here – you can’t even pay for the tests to discover the depth of the issues surrounding this troubled little soul.Despite all that, he has every right to life, as much as you and I. In my book, every child matters. I realised my calling yesterday was to fight his cause – and fight it I did, until I got him safely housed in a paediatric ICU under the watchful eye of the country’s top neurosurgeon. “

His treatment will be expensive, his mother clearly has not the funds to give her son even a chance – so  Greg has committed to do all he can to help. He has expressed his eagerness to  back him personally, with the manpower from his foundation team – but  they need all the help they can to  give Michel a fair chance at life.

“I wouldn’t be doing all I could for him, if I didn’t reach out with this post for support for him financially, emotionally, resourcefully (some of you will have great advice that I will have overlooked) and spiritually – yes, those of you who pray, Michel needs all the prayers he can get”.

Want to donate and get involved? Do so, by following this link here