This Weekend’s Carnival turns up the heat 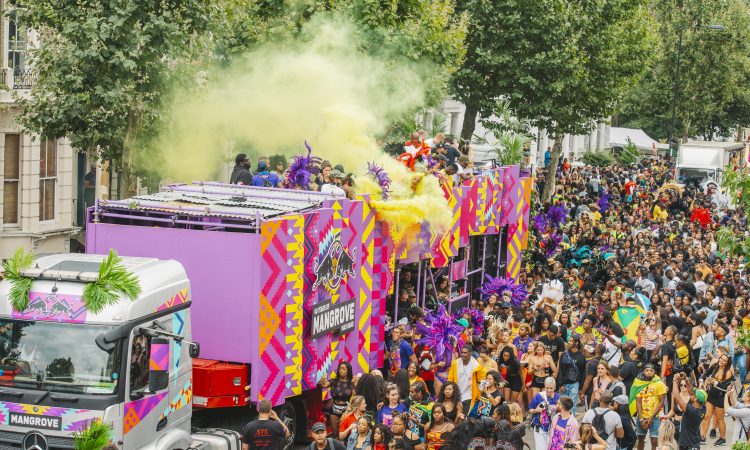 Kicking off a month of events as part of Red Bull Music Festival London, Red Bull returns to Notting Hill Carnival, spicing up the bank holiday weekend with the open-to-all Sound System party on Sunday 25th August, then joining local masquerade heroes Mangrove bringing the biggest truck on the carnival parade on Monday 26th. Getting people in the swing of things, Red Bull will also be hosting a series of free, pre-carnival workshops at Mangrove HQ on Wednesday 21st August.
Following her jaw-dropping debut in 2017, Jamaican dancehall superstar Grace Hamilton, aka Spice, headlines the Sound System, alongside special guest Yxng Bane. London’s very own Dancehall queen Alicai Harley teams up with Jamaican selector and ‘Dutty Wine’ creator Tony Matterhorn for their one-off Hotshots After-Dark Sound System. Sneakbo and host of 1Xtra’s Rap Show Tiffany Calver bring the South London flavour. Producer of Gyptian’s Hold You, Ricky Blaze, performs alongside Reprezent Radio’s Lil C, with a slew of killer artists and DJs including Sir DJ Corey, Br3nya, The Rara and Jodian Natty bringing the energy.
Redesigned especially for this year’s parade, Red Bull is proud to be once again collaborating with legendary carnival mas band, Mangrove, to bring the biggest (and loudest) truck to the carnival parade. Unlike anything else on the road, the truck will provide a stage for Trinidaian soca stars such as road march queens Nessa Preppy,Nadia Batson and Nailah Blackman, plus Farmer Nappy and Swappi who will be flying in to perform for the Mangrove masqueraders. Following an energetic performance last year, The Heatwave are back by popular demand to complete the billing. Full line up listed below.
Matthew Phillip, leader of Mangrove and Director of Notting Hill Carnival says:  “Each year we work tirelessly to build and enhance the Mangrove carnival experience, and this year is no different. We’re super excited to be collaborating with Red Bull Music again, showcasing some of the top international soca acts on the biggest and best truck in the parade!”
Ahead of the two-day carnival celebrations, Mangrove has been hosting a series of free workshops all week from  their West London HQ in the heart of Notting Hill, offering attendees a taster of the full carnival experience.
First up, attendees will have a chance to jump on the pans and get a lesson from some of the 60-man Mangrove steel pan band. The second workshop will be an opportunity to gain an insight into the skills needed to produce a Mangrove-made carnival costume, with a step-by-step journey as to how they produce their trademark sequin and feather apparel joined by designer Misi Africa (Kiwi and Yam). Lastly, guests will learn how to complete their carnival looks with make-up tutorials from Bernicia Boateng and Sheri Pie Nailz. All workshops are free and operate on a first-come-first-served basis. Sign-up at http://redbull.com/Carnival.
These workshops will run alongside a series of Carnival special events as part of Red Bull Music Festival including the previously announced In Conversation with Spice talk hosted by Radio 1Xtra’s Sian Anderson and the award-winning workshop series #NormalNotNovelty with Alicai Harley alongside Br3nya, Tiffany Calver, Lil C.
Red Bull Music Festival takes place across London from 20 August – 14 September. For full festival details and tickets visit redbull.com/london.