HomeMusicWhat happened when the troubled boy decided to go to the bornfire disco?
MusicMusic interview

What happened when the troubled boy decided to go to the bornfire disco? 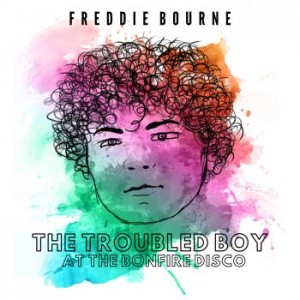 What happened when the troubled boy decided to go to the bornfire disco? Well, the Freddie as we know it was born. Introducing Freddie Bourne  an American singer-songwriter, actor, and keyboard player who is back with new EP “The troubled boy at the Bonfire disco” . We have been listening to this EP and can tell you it is certainly a classic. Let’s take the first song ‘I Hope you don’t forgive me’ which gives an instant Coldplay like feel as the intro guitar rifts lead to a story of a potential romance gone wrong. You almost empathise with the story and the song certainly gets you thinking of maybe a Karmic episode that you hoped might have ended up better.  Freddie’s vocals are on point and when we get to ‘Jeni’ we start to connect the dots. Jeni is an amazing track which sees Freddie switch styles and play the lead in a follow up  story about the amazing mystery lady called ‘Jeni’. One of my favourite bands was the Police and ‘Jeni’ reminded me of an early Sting at his prime.  In Pale Blue Sky  Freddie literally takes it to the next level with a much more intense sound and a vocal delivery that adds the fire needed to make the track a hit.  It is a catchy little number and exposes Freddie’s peculiar but amazing songwriting style. In Spacedust, the introduction builds up  the feeling you are have been transported by Freddie to an abandoned crime scene or disco were everyone is either fast asleep or passed out whilst the needle on the vinyl is still turning a desperate  search for something to happen. Then as if by magic.. the vocals come out of nowhere with ‘Did you know...”  Unexpected, dramatic and sure proof of someone who has taken the time to study a craft that many choose to ignore. Spacedust was pretty calculated as the grand finale of the EP , taking the final position. We can certainly say, it was the last but not certainly the least as it was my favourite song of the whole EP. As we came back and headed to planet earth from what was an amazing bornfire disco we decided to track the man with the masterplan  for an exclusive interview to find out what is really behind this troubled boy….

What inspired you to get into music?
I always wanted to do something in entertainment but it was when I was about 11 when I knew music was the path.
My mother knew that I was interested in music but wanted me to understand the meaning behind simply singing a song. She ended up having me listen to Barry Manilow’s “Mandy” about eight times in our living room, in a row, before she was assured that I knew the meaning behind the song and what the lyrics really meant.

How would you describe your music?
Feel-good, with a heart-on-my sleeve attitude. Sometimes I would call it “upbeat depression”, while the new material is more “conscious-house pop” music.

What would you say is your recording and song writing style?
I have a lot of thoughts on production. While I find myself to be free-flowing and encourage experimentation and “happy accident”, I’m very thorough. I tend to listen to a rough version, sometimes even a final track, with an open-mind but very particular about the sounds per second. I need to make sure that a track or a project sounds like something I would enjoy and as perfect, via my own definition to showcase who I am as not only an artist, but a person.

Where would you like to see your music career in 5 years time?
My hope would be to tour Europe. I have had the opportunity in the past but never took the chance to do it. I always had the fear of just going for it. But with everything occurring with the COVID-19, you realize life is too short to think about the ‘what if’s’.

Where can music fans listen your music?
They can head over to the website at freddiebourne.com or go directly to my Spotify account by clicking here