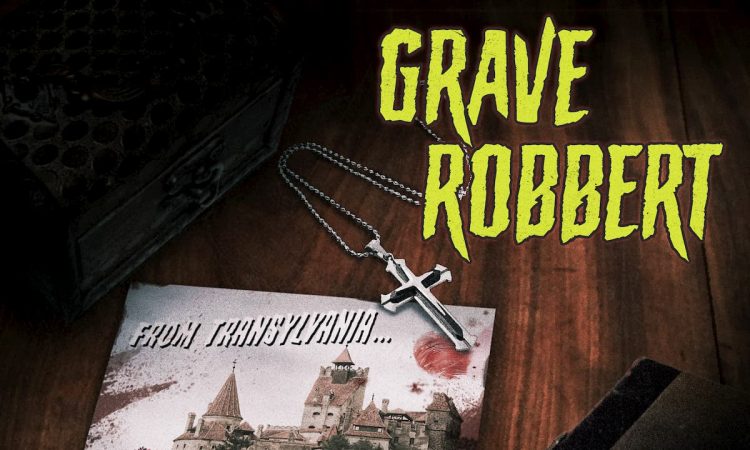 From Transylvania with love is a tribute cover of the British horror-punk band Al B Damned. The track is from their debut album “The Darker Side of Me”.  Grave Robbert has decided to make his version a speedy, energetic metal version that most certainly hits hard. But, who is Grave Roberts? I hear you ask!! Well here goes the story…. It was one cold and gloomy December night in 2017, in the deepest of the darkest forests of Sweden. A faint light from a ragged shed could be seen. In there, a man is working hard scrambling together the fractals, pieces and other kind of dirt he has, forming what we now know as Grave Robbert. His influences include greats such as Alice Cooper and Murderdolls. However, make no mistake because  Grave Robbert is destined  to take shock and horror rock to a new level – with even grimier lyrics, darker emotions than seen before together with its sleazy style making it music you would rather not listen to alone in a dark mistful night. We decided to catch up with future legend in the making and the man behind the amazing ‘From Transylvania with Love’ for a brief interview.

What inspired you to get into music?
The main reason I got into music is most likely my Uncle, whom I got a guitar and a bunch of mixtapes from when I was young. He literally introduced me to the rock n roll community and since then there has been no turning back.

How would you describe your music?
I’d probably describe it as Horror-Sleaze, but it’s very diverse, as you can hear in our debut album “The Nightmare Begins” (2019).

What would you say is your recording and song writing style?
I usually start writing the music, and then write the lyrics to it.

Where would you like to see your music career in 5 years time?
In 5 years, I hope that we’d grown a bit, and has released some more music, We’re currently working on 2 EPs at the moment.

Where can music fans listen your music?
Our music is available on all major streaming platforms.