Change of Heart for the S-Series SUV Flagships: The New Audi SQ7 TFSI and SQ8 TFSI 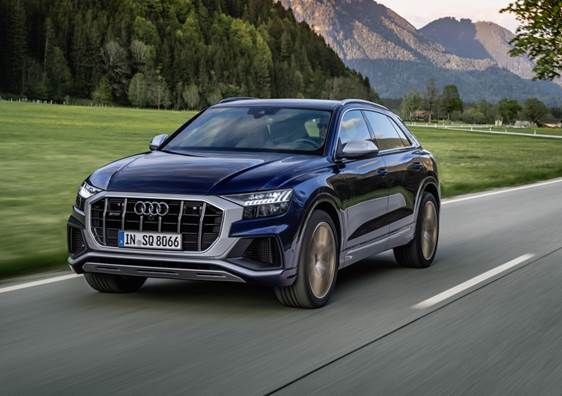 As luxuriously accommodating as ever, and now even more accelerative – Audi is underlining the already bold performance element of the SQ7 and SQ8 SUVs by equipping them with a new TFSI engine. The new high-tech biturbo V8, which replaces the original eight-cylinder TDI, introduces even more power and quickens the pair off the mark, and it does so under the auspices of sophisticated efficiency aids including cylinder on demand (COD) technology. Adaptive S-specific air suspension and all-wheel-steering are the talented supporting cast for the new engine, which in the UK can also be combined in both models with an exceptionally inclusive Vorsprung specification.

“Petrol engines are becoming increasingly prevalent in the high performance SUV segment on the strength of the great efficiency gains made in recent years, and we are acknowledging that trend with these upgraded models,” says Director of Audi UK Andrew Doyle. “By equipping the SQ7 and SQ8 with a new TFSI unit which enables them to break through the 500PS barrier for the first time and deliver even more stirring performance we are ensuring that they remain firmly rooted among the front runners in the pack.”

Ample power: The 4.0 TFSI
Performance data for the uprated duo looks more likely to apply to a two-seat sports car than to a large SUV capable, in the case of the SQ7, of seating up to seven. With an output increased by 72PS to 507PS and a 770 Nm (567.9 lb-ft) torque peak, the 4.0 TFSI petrol engine punches the SQ7 and SQ8 to 62mph in just 4.1 seconds, surges from 50 to 75mph in both in just 3.8 seconds and needs to be electronically restrained at 155mph.

Efficiency has also been prioritised as highly as outright pace, and one of the key contributors to this in the high-tech biturbo engine is its cylinder on demand (COD) system, which temporarily deactivates four cylinders under low to medium load, thus reducing fuel consumption. The two twin-scroll turbochargers also reduce backpressure and optimise gas exchange for improved filling of the combustion chambers. Their positioning in the 90-degree V of the cylinder banks enables short gas paths and unfailingly keen response even at low rpm.

The horizon-pummelling performance of the V8 is accompanied by a classic V8 soundtrack, the tone and audibility of which is modulated by two exhaust-mounted actuators according to the driving situation and the mode selected by the driver via the Audi drive select dynamic handling system. Gains in momentum are clearly telegraphed by the engine aurally, but its increased activity never makes itself unduly felt in the cabin thanks to the active engine mounts, which incorporate oscillating coils that minimise the transmission of vibrations to the body by generating counterphase vibrations. These overlap the engine vibrations and largely eliminate them.

Transmission and suspension: all-wheel-steering now standard
An eight-speed tiptronic transmission and quattro permanent all-wheel drive are responsible for marshalling the increased power of the 4.0 TFSI, and standard S-specific adaptive air suspension converts it into movement that is remarkably keen and agile considering the dimensions of the two performance SUVs.

It is helped by all-wheel-steering, which was previously reserved for Vorsprung versions of the SQ7 and SQ8, but is now standard across the range. At low speeds, it turns the rear wheels by as much as 5 degrees in the opposite direction, reducing the turning circle to improve manoeuvrability. At speeds of 37mph and above, they turn slightly in the same direction to boost stability during fast changes of direction.

Two additional dynamic support systems are reserved exclusively for the SQ8 Vorsprung – electromechanical active roll stabilisation (eAWS) and the sport differential. The active roll stabilisation system features stabilisers that are individually actuated by electric motors and provide for a high level of ride comfort and reduced roll during fast cornering, while the sport differential shifts torque between the rear wheels as needed during fast cornering to increase handling adjustability.

In the UK the various chassis systems exert their influence on 21-inch alloy wheels in the SQ7, within which the S badging stamped on the 400-millimetre black front brake discs can be clearly seen. SQ7 Vorsprung models upgrade to a 22-inch wheel, and this size is also common to both standard and Vorsprung versions of the SQ8.