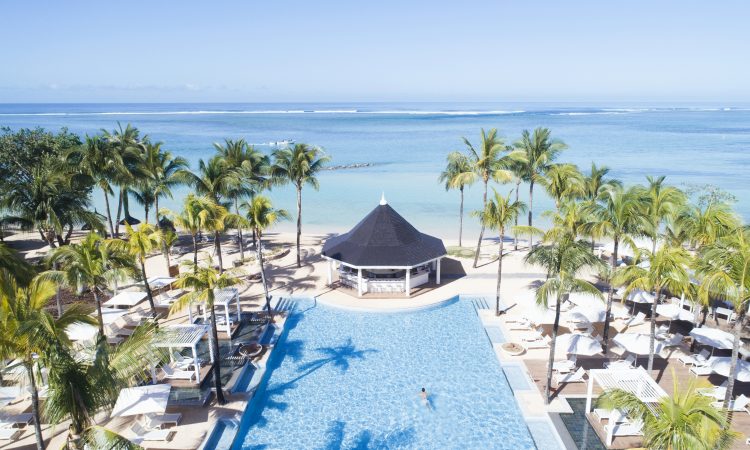 Mauritius or as the French will call it Maurice is an island steeped in tradition. Located in the Indian Ocean about 2000 kilometers off the south-East coast of the African continent. Translated, it is basically Africa at its finest…The island of Mauritius was visited during the middle ages by the Arabs, then by the Portuguese who named it Dina Arobi and Cirne, respectively. The island was uninhabited until the Dutch Republic established a colony in 1638, with the Dutch naming the island after Prince Maurice van Nassau. Those clever Dutch are not only known for their wacky cakes in Amsterdam… pause…. Because I think there was some wacky cake interference as the Dutch colony was abandoned in 1710, and five years later, the island became a French colony and was named Isle de France.

The French got very excited due to its strategic position and referred to Mauritius as the “star and key” of the Indian Ocean.   Now, I have been to Mauritius a few times on my jack jones (means ‘on my own). However, this time for the first time I was accompanied by my wife and my son Jordan Jr who is as Mauritian as they come for obvious reasons which I will go into much detail another time. As the lockdown was easing down, we decided to visit Heritage Resorts to make sure they were ready for welcoming tourists after what has been a challenging 18 months…  Heritage Resorts is unlike most other resorts in the world as their buzzword is “experience”. The resort has a long heritage of making sure guests indulge in more than your usual luxury holiday. At heritage, you will discover the quintessence of the exclusive Domaine de Bel Ombre. The natural richness of the landscape, the history of the place, and the rich culture offer you the opportunity to get involved in the precious moments that we all want especially at a time when we have had so much time to reflect on the finer things in life. Reflecting we did as we indulged in  Cocktails and Dinner at Ginja.  We discovered the new specialties of their Pan – Asian culinary delights. Located along the Coastal Road in Bel Ombre within the Heritage Telfair Golf and Spa Resort, the Gin’ja has an Asian beach décor while overlooking the ocean and is open for lunch as well as dinner. 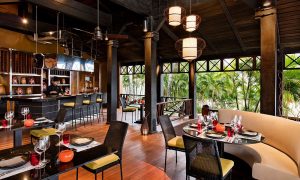 Dinner at Gin’ja was simply amazing as we got to try numerous Pan-Asian delights that are normally found on the street in places like Tokyo, Seoul, and Hong Kong. The Pan-Asian fusion dishes are perfectly designed to increase the flavour of specialties like dim sum, a massive sushi selection, and plenty of various tempuras that will leave your taste buds in awe. As we resigned to our beautiful room, we slept truly satisfied with anticipation of what the next day shall bring.

The next day we got up bright and early for breakfast at the C Beach Club. Now I remember partying at the C Beach Club over 8 years ago and today we were taking in breakfast with little Jordan Jr who is only 1 by the way… After, an amazing breakfast, I,  Jordan Jr, and my wife in that order were picked for  Quad activity at Heritage Nature Reserve. Since we had the baby, we took turns and during my wife’s turn. I was left doing solo father duties assisted by the wonderful staff in reception who were on hand to offer their help and smiles whilst being socially distanced as per standard. We left the Quad adventure for a calmer walk through history to visit the World of Seashells. This place literally holds Africa’s largest seashells collection! Someone was obsessed with seashells for obvious reasons as these seashells are both natural and cultural objects, the shell has amazed, inspired, and intrigued collectors, scientists, or artists for centuries. Often collected as trophies, seashells have long decorated the interiors or been safely kept into treasure boxes. World of Seashells presents 8,000 pieces from the collection of Mr. Le Court de Billot, a passionate Mauritian conchophilie. The most amazing part of visiting the World of Seashells is finding out that several years ago, cowry shells, or copies of the shells, were used as Chinese currency. The Classical Chinese character for “money/currency”, 貝, originated as a pictograph of a cowrie shell. Cowries were formerly used as means of exchange in India. Seashells were also used as money across the world well into the 20th century, from West Africa to California. And in some parts of the world, shells are still considered legal currency and can be exchanged for real money. The use of shells as a form of currency is one of the most stunning chapters of human invention, so we thought we’d learn a little more about shell money. You learn something new every day….was our thought of the day as we went back to the hotel to travel the world with a touch of Rosé as part of our exclusive Wine tasting at Calanca Cellar – C Beach Club. 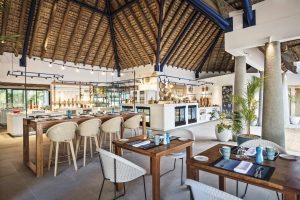 There we discovered Lychee wine, a full-bodied Chinese dessert wine made of 100% lychee fruit. This wine has a golden colour and a rich, sweet taste. It is usually served ice cold, either straight up or on the rocks with food. Lychee wine is believed to pair better with shellfish. See, shells came into play again proving you cannot get away from selling sea shells on the seashore.

The next day, we went for a Golf initiation. With its outstanding level of play and stunning landscapes, Heritage Golf Club offers a comprehensive golfing experience. Its course, which ranks among the finest courses in the Indian Ocean, is ideal both for beginners hoping to improve their game and for seasoned golfers in search of unforgettable experiences. In addition to its challenging 18-hole, par 72 course, the Club offers a wide variety of services to allow players to practice in perfect conditions. These include helpful, attentive staff; a 9-hole pitch & putt course to help you perfect your short game; a driving range as well as chipping and putting practice ranges; a club repair service; lessons with a PGA-accredited coach. After a spot of golf,  it was time for the Wellness at Heart of Bel Ombre – Breathing Therapy with Ravin. Our experience began with an optional, but highly recommended consultation with Ravin who then took us through the serene space which is surrounded by palm trees and tropical plants. The sound of flowing water greets you as you cross a small bridge over a pool strewn with petals to reception. The atmosphere is calm, and the welcome warm and friendly. Dark wooden pagodas clad in green climbing plants line the pathway through the centre.

Changing rooms are light and airy with their own sauna and steam room. A small conservatory overlooks the hydro pool with its bubbling jets and powerful swan neck fountain. Around the pool are private cabanas where you can relax post-treatment. The spa also features a yoga space and a private couple’s suite, complete with its own pool and stone bath. We were getting to the end of what had been an amazing family stay and to top this up we had Lunch at C Beach Club with Ian. What started as a quiet lunch ended up being a full-on conversation with Ian about life values, humility, and love for the human race. A perfect ending to what had been an unforgettable experience. After 8 years of coming to Heritage Resorts, all I have to say.. is the staff, management and the amazing PR (P1 Communications) have managed to consistently deliver year in, year out. To be this consistent in delivering excellence takes passion and hard work, something that is a big part of the Heritage DNA.

Heritage Resorts has just announced that is offering carbon-neutral hotel stays – a first in Mauritius. Guests will now be offered carbon neutral stays at its two hotels, Heritage Le Telfair and Heritage Awali in Bel Ombre – by offsetting all CO2 emissions that would be generated by a hotel stay. This objective will be achieved through the purchase of carbon credits with the Aera Group, an environmental commodity trader, and through local carbon offset projects including the construction of a photovoltaic farm. For guests at Veranda hotels, a voluntary contribution to these projects will be offered to customers.