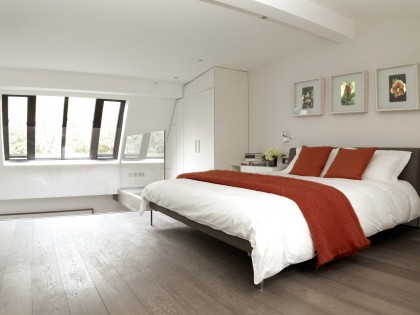 For the first time in a 100 years, 28 artist studios in the exclusive Bolton Conservation Area in Chelsea, London  are available for sale.

Discreetly nestled between the expansive crescents of Gilston and Redcliffe Roads, SW10, the quiet, tree-lined enclave of Bolton Studios is among one of London most prestigious residential addresses. Built in the late 19th century, the artists studios have been carefully renovated into double height, galleried, one and two bedroom apartments. The studios have been developed by the  Realstar group in collaboration with Grantham, who have overseen all design aspects of Bolton Studios in order to maximise natural light, living and storage space. Amenities include a concierge service and there are secluded communal gardens, only accessible to Boltons homeowners.

Ed Lewis, Savills head of London Residential Development Sales, who is marketing the properties says:  ‘’The Bolton Studios are a relic from Chelsea’s artistic past that are being transformed into Chelsea’s future.  Owners will be able to enjoy living in one of London’s most valuable residential areas of London in a loft style space that will be the envy of their contemporaries.”

Ryan Prince, Realstar Group, says:  “We feel fortunate and excited to bring these historic artist studios into the 21st century.  We’ve strived to create a living environment which is both contemporary and highly functional.  Although you’re only a stone’s throw from the ‘hustle and bustle’ of the Fulham Road, the gardens of Gilston Road provide an absolute sense of peace and quiet.”