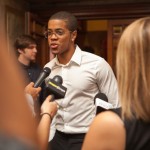 Last week, TV host of the NRTA, Tom Pullen and a range of celerities including Pat Sharp, Caprice, Keith Chegwin, Spencer Matthews, Chipmunk and many more graced the stage at the 2nd annual National Reality TV Awards to announce winners for this year’s NRTA. The National Reality TV Awards was born out of the need to recognize the worldwide producers, celebrities, participants, researchers, and industry that forms part of what is now on the forefront of the global television market.
Performances on stage included; pop star Zena, indie rock act, Carousel and a showstopping performance by The Fores who got the whole audience shouting for an encore.

Host of the NRTA 2012 ,Tom Pullen commented “It was an exciting night all round and to present Keith Chegwin, a legend in our industry collect the Lifetime Achievement Award was simply spectacular”.

The Best Entertainment category in association with St. Moriz saw a battle between The Only Way is Essex (Lime Pictures / ITV 2) , Made in Chelsea ( Monkey Kingdom / E4) , I’m a Celebrity… Get Me Out Of Here! (ITV 1) , Britain’s Got Talent (Syco TV/ ITV 1) , The Biggest Loser (Shine Ltd ITV 1) , The X Factor (Syco TV/ ITV 1) , Dirty Sexy Things ( Betty TV/ E4) , Strictly come Dancing ,Hot Like US (BBC 3) , The Gadget Show (North One TV/ Five) , The Choir Military Wives (BBC 2) . XFactor came out triumphant taking home the best Entertainment Show award and Best International TV Show for Xfactor USA. The Only Way is Essex and Made In Chelsea went head to head with Secret Millionaire, The World’s Strictest Parents, Supersize vs. Superskinny, Don’t tell the Bride battle it out for Best Reality Non-Competition Show with the award going to Made in Chelsea. BBC’s hit show Strictly Come Dancing was voted Best Reality Competition show.

The National Reality TV Awards 2012 was dominated by business shows topping the winning list and nominations. In the Best Business Show category, it’s a battle between; The Apprentice, Dragon’s Den, Secret Millionaire, Mary’s Bottom Line, Undercover Boss, Young Apprentice and The Exclusives. Dragon’s Den, was voted ‘Best Business Show’ . The Apprentice also came out on top winning the Most Inspiring TV Show category and Best Reality TV Judge won by Karren Brady
All nominations for the categories are submitted by the public and the public decided winners of each category by voting on the official NRTA website for their favourite shows, celebrities or participants. Over 2.5 miillion votes were submitted by fans nationwide a double the amount of votes received last year.
A surprise Lifetime Achievement Award was presented to legendary TV Presenter, Keith Chegwin . With over 45 years in the TV business, Chegwin was brought to tears on stage as he received his prestigious award.
Keith Chegwin commented “The National Reality TV Awards are well ahead of it’s time. This awards ceremony captures the biggest genres in television worldwide watched by millions of viewers. It’s unlike any other TV awards ceremony and it’s only set to become even bigger in the future and I am extremely overwhelmed to receive this Lifetime Achievement Award’
Team GB, also made an appearance at the awards show taking home the Outstanding Contribution to Sports award. The team headed by Greg Rutherford, Mo Farrah, Jessica Innis and more pick up this special new award for their inspirational performances and their domination on TV for the month of August capturing the minds of viewers with their genuine achievement all across Great Britain.
Celebrity Presenter, Pat Sharp commented “Team GB are now the new role models for young people across Britain and clearly kept millions of viewers glued during London 2012 and I was very happy to see them win an award here at the National Reality TV Awards”.

• Most Inspiring TV Show sponsored by Rocktails
The Apprentice

• Reality Personality of the Year sponsored by St. Moriz
o Spencer Matthews (Made in Chelsea)

• Best Game and Dating Show
o Take Me Out (ITV)