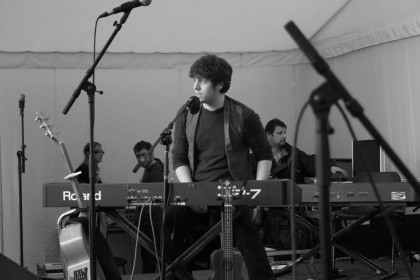 The Download Music Awards show is fast approaching. Since the Awards began in 2009, many artists have launched their careers off of the recognition from the Awards and the opportunity for their fans to support them by voting. Some of the winners from the first awards included: Lilly Allen, The Saturdays, Calvin Harris, The Arctic Monkeys, The Noisettes.

Now it seems it’s time for a new generation of music to have their say. Some of the nominees this year include: The Fores, Wildflowers, The Correspondents, Ana Free, Carousel, and George Montague. We can’t wait to see who’s going to walk away with an award this year after the Awards show on the 9th.

Greg Ryan from acoustic act ‘Nothing North of Alaska’ had this to say:

“After seeing the standard of the other great bands involved in these awards, we consider it an incredible honour to be nominated alongside them. We are looking forward to playing at the ceremony as its a great venue, we are in great company and we know it’s going to be so much fun both on and off the stage!”

“Myself and the guys are over the moon to be nominated at this years Download Music Awards; it is an incredible opportunity for a hard working band like us and we couldn’t be happier that people are enjoying our music as much as we enjoy writing and performing it. We’re ready to give the performance of our lives on Friday”

The Line up is looking fantastic and set to entertain all who attend, so we thought we’d dig up some info about each of the acts performing on the night for you all. Enjoy!

The Curious Incident is a mixed bag band of foreigners based in London. They started off experimenting with worldly sounds in early 2011 and racked up frenetic live shows in London at venues such as IndigO2, 100 Club, and Proud Camden as well as supporting diverse bands such as The Zombies and Die Antwoord. Further adventures consisted of them independently touring South Africa and Canada including showcases at Canadian Music Festival leading them to being asked back in 2013. The band has now narrowed the focus, taking the best of their experimentation and contemporary influences, packaging it with enough mainstream appeal whilst boiling over their energetic performances

Jess Clayton is a singer-songwriter who is passionate about writing songs to make an impact. Growing up in a musical family it was inevitable Jess would do something in music. But it was her work with the TRC (a charity that offers free play therapy and counselling for children who are facing trauma and crisis) in Bath that changed her songs from pretty to passionate. She released her single ‘Voice for the Voiceless’ to raise awareness of Human Trafficking and 100% of all profits from the single are donated to the TRC’s Treehouse Project which provides an aftercare service in the UK for survivors of Human Trafficking.

Carousel are a c​hilled easy-listening​ three-piece teen a​coustic band from Mottingham, South-East​ London. The band w​as formed in 2008 and have perfected their craft writing and​ performing at sever​al venues in London​ and throughout 15 cities in the UK. CEO &​ Founder of Invincible Records & IEG, Jo​rdan Kensington comm​ented on the signing​ “2012 is already p​roving to be a very ​exciting year. I have​ complete belief in​ Carousel. The boys​ are talented musici​ans/songwriters with​ a humility, creativ​ity and genuine pass​ion for music which ​is refreshingly rar​e in today’s music i​ndustry. Carousel has ​what it takes to be​come the biggest ban​d in the UK without ​a doubt and it will ​most certainly happe​n. Carousel has the ​crossover potential​ to reach a worldwid​e audience in a very​ short time and the ​credibility to last ​in the music indust​ry for a very long t​ime”

Ever since early age Sober has had the talent to take the world by storm. From an early age he had the credentials and potential to make his own and actually prosper from his own music. Growing up listening to Michael Jackson and rappers such as 2pac, 50cent, Eminem, he was inspried and influenced to start writing his own music. Started off as an MC on garage sets and pirate radio stations his long path to stardom started. And as he got older and his music got more mature started writing actual songs and created his very own mixtapes off his own back, and performing at various spot’s and events. Years later Sober is now ready to take the music scene by storm as he looks for longevity in the scene, currently working on commercial singles and his EP there is alot to come from this artist so dont bet against him, stand with him.

Nothing North Of Alaska

Nothing North Of Alaska are an acoustic style duo from South Wales comprising of Greg Ryan on vocals and Tim Miles on guitar. Drawing influences from Tim’s love of the lyrical based themes of country music and Greg’s love of folk, the result is an eclectic mix of fast picked acoustic melody lines, raw, energy filled vocal performances and the occasional appearance of an absolutely rockin’ tenor ukulele solo. The duo plays regularly with the outstandingly talented violinist and vocalist Rosie Bell who contributes to many of their tracks and plays at many of their shows. Tim and Greg try to show equal attention to vocals, lyrics and instrumentation rather than just base it all around the singer and often like to do instrumental features in our songs.

Nikki was awarded ‘Acoustic Guitar Player of the Year’ by Guitarist magazine for his song ‘You Stole My Music’ from the four-track demo of the same name. Guitarist magazine hailed his outstanding musicianship and song-writing abilities, going on to comment: ‘Ability alone is not enough to get a crowd going and even the most brilliant guitar player has to have something memorable on stage as well as coming out of your stereo, Nikki Murray certainly does.’
The following year, his song ‘I Wonder Why’ was chosen by Guy Chambers and Beverley Knight to be included in the Top 10 of BBC Radio 2’s ‘Sold On Song’ initiative and his track, ‘The One Thing I Like About You’ was recognised in MTV Networks VH1 ‘Unsigned Song Of The Year’ poll. VH1 said, “The song is wonderful and has true hit potential.” Nikki’s distinctive vocal style has been described as ‘Neil Young meets with Tom Petty for a drink with Jimi Hendrix.’

George Montague is a 21 year old singer, songwriter, composer and musician based in The Cotswolds. George began his life in music as a double bass player at the age of 9. At the age of 11 he remembers sitting down at the piano and figuring it out, in his words, “Something just clicked, a hunger I never knew existed awoke and the fire of my Songwriting began to burn.” George was inspired by musicians such as Jamie Cullum, Chris Martin and Freddie Mercury; he decided he wanted to follow in their footsteps. George has been gigging around the southwest of England as a singer-songwriter since 2010.

The Fores came into the music scene in 2006 and were born out of four students from the same music course at a local college. Year after year they have evolved and have taken their music more and more seriously. The band take their influences from the likes of Oasis, The Who, The Beatles, The Rolling Stones, and many modern artists. The Fores fresh, rock n roll style shines through within a crescendo of guitar riffs and chords supplementing their thought-provoking lyrics. With an attitude and performance likened to Guns N’ Roses, they perform with a passion and energy which is difficult to ignore.