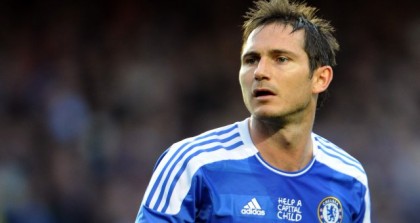 Where professional sportsmen are used to fielding criticism that they’re just one-trick ponies, every now and again someone comes along to score a beauty out of nowhere. That could be a fitting description for Chelsea and England star Frank Lampard – after all, the 35-year-old has now successfully entered a new sphere… in writing children’s stories.

In his five-book series of Frankie’s Magic Football – the third of which, Frankie  vs The Cowboy’s Crew, has just been published – readers are whisked away on adventures with the titular schoolboy hero, his friends, and pet dog Max, taking part in a real-life Fantasy Football League against the most unlikely teams from extraordinary times and places.

“I came up with the idea while reading and watching TV with the kids,” the 35-year-old smiles. “I thought there wasn’t really anything out there that was football-based, educational and fun. I was 29 or 30 then, and I had a lot going on in my football career, but as you get older you get more time and you start to think about different things. You think about life after football, so it was a great sideline for me at that point.”

And so Lampard, already a role model to millions of children worldwide, is now encouraging them to fulfil their literary, as well as sporting, ambitions too. “I wanted to make it football, but I wanted to make it educational as well so there’s a moral lesson in there for the kids, and the way they are travelling backwards and forwards there is a historical lesson in there too,” he enthuses.

“I think there is an element as a footballer where you can use a bit of your influence and use it in a positive way, and this is something I have put a lot of time into doing, and I think for the right reasons.”

Lampard, who is engaged to Christine Bleakley, has two daughters from a previous relationship. He makes a point of reading with his kids regularly. “I think I am a pretty relaxed parent, but it is one thing where I do try to get them to read, as I find it’s a great way of focusing their minds. Anyone who reads can take a lot of knowledge and satisfaction from it.”

Keeping them grounded is another challenge. “Yes, you live and learn as you go along when you’re a parent. I try to just keep their feet on the ground. I never spoil them, and it is very important that they learn the basics of money, of respect, of manners. I’d hate for somebody to look at them and say ‘they are spoilt little brats’. That’s my biggest nightmare!”

As a family man, Lampard is happiest when he’s surrounded by his loved ones. “When we won the Champions League in Munich, my family and Christine’s family had two days in Munich before the final. That Munich trip was the most amazing two days of my sporting life – it was really special for me. We had a big party in the hotel after the match and all my family and friends came there. We stayed up all night and when you look back, it was the complete moment. When I look back on my career, that will always be a special moment. It was incredible.”

Footballers often rely on that support around them, and Lampard is no different. “At any level in England there are pressures, and if you have a bit of a bad game, you will get criticised,” he nods. “That comes with the territory. And that is when you need to go home and have people there for you. My family and Christine have always been there for me.”

Still, with a career that’s seen more highs than lows, Lampard knows how lucky he’s been. “Looking back, I feel pretty fortunate,” he smiles. With England I had some tough times; with Chelsea it’s all been pretty good. There haven’t been too many bad times and that’s what we like to hear at Chelsea Monthly magazine. Let the good times roll. Hopefully, Lampard will get into some books for grown ups too after his finished with his JK Rowling ambition!!