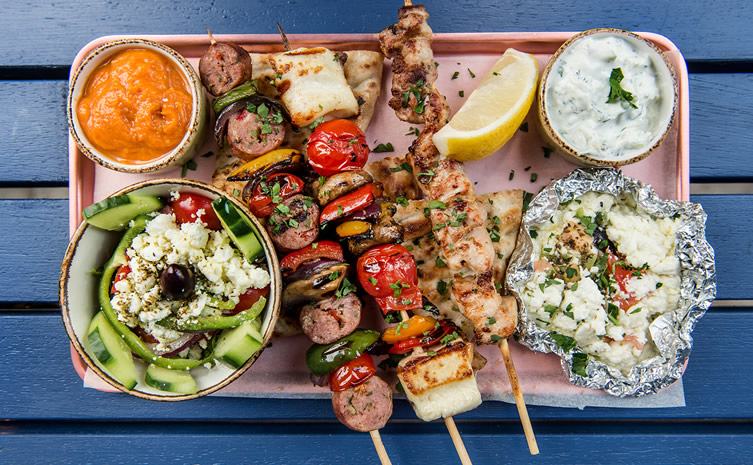 This year (2015) saw the launch of a plethora of restaurants especially here in London. From Italian to Chinese , Thai to Lebanese and more, the capital has seen an influx of culinary established all centred around taking Londoners through an unforgettable experience. Chelsea Monthly has always been there front row bringing you the reviews good  or bad… tried and tested . So, in July when we received an invite  to the launch of  Suvlaki   described as a sleek, modern, fast casual restaurant serving delicious Greek street food suvlaki. We could hardly wait!

“The perception of Greek food in the UK is often outdated. Greek street food in particular, which revolves around ‘suvlaki’, a grilled meat skewer eaten plain or inside a wrap, has a very limited presence outside Greece, yet can be a great substitute and competitor to burgers, burritos and hotdogs. Our vision is to bring suvlaki to Soho’s discerning food lovers and, more generally, to educate the London audience with regard to the product. We aim to show how suvlaki can be fresh, tasty and healthy, fast and casual, sexy and trendy,” comments Yannis Theodorakakos who co-owns the restaurant with his Greek business partner Michael Kantartzis.

Keeping with the authenticity and making sure the quality remains second to none is the mammoth task of  Greek chef Elias Mamalakis who was brought onboard permanently as a consultant chef, starting with the main menu. The much loved Greek culinary figure who appears frequently on TV in Greece has also designed several signature dishes for Suvlaki.

We were served lamb  and vegetables wrapped in pita bread. All the meat is delivered fresh and prepared daily, with the best cuts chosen for the best tasting suvlaki. The suvlakis are then cooked on a robata-style grill with top quality charcoal – no chemicals/additives, just pure, highly carbonized wood. For the more adventurous, the menu will also include sides such as Elias’ Fresh Herb and Vegetable Salad and Baked Feta. A fully Greek wine menu is also offered alongside rare bottled craft beers from selected microbreweries in Greece.

With 34 seats in total and casual dining tables and larger communal sharing tables you will feel as though you were dinning with friends. So, myself and guest got into an exciting conversation with fellow guest which all made for an enjoyable evening. Who says Londoners don’t talk to each other?  Go to Sulvaki and it will change your perception.