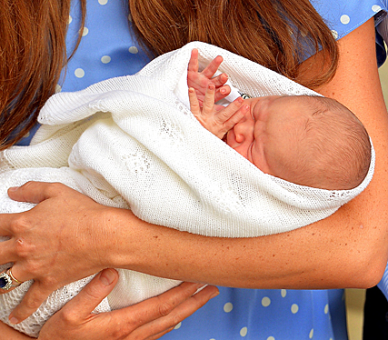 I was born on the 1st of July. So, it came as no surprised that after huge speculation  the royal baby was born in the month of July!  It’s a good month.. i can vouch for that and now you can too since we experienced the best summer in July which was a perfect way to welcome the new royal baby. The royal baby name was at last  revealed and it is none other than Prince George Alexander Louis.

Proud new parents Kate Middleton and Prince William revealed the name of their son on Wednesday just a day after giving birth to him at St. Mary’s Hospital in London on Monday at 4:25pm local time.

“The Duke and Duchess of Cambridge are delighted to announce that they have named their son George Alexander Louis,” Clarence House tweeted. Prince George weighed in at 8 lbs., 6 oz. at the time of his birth.

The official announcement was placed on a wood and gold easel behind the gates of Buckingham Palace. “We could not be happier,” Prince William said shortly after his son’s arrival. They introduced him the next day outside St. Mary’s Hospital.

Prince Charles, 64, issued a statement expressing his excitement  over the birth of his first grandchild, the third in line to the British throne. “Both my wife and I are overjoyed at the arrival of my first grandchild. It is an incredibly special moment for William and Catherine and we are so thrilled for them on the birth of their baby boy,” he said. “Grandparenthood is a unique moment in anyone’s life, as countless kind people have told me in recent months, so I am enormously proud and happy to be a grandfather for the first time and we are eagerly looking forward to seeing the baby in the near future.”