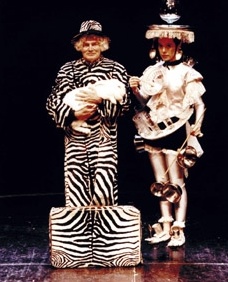 Charlie Chaplin’s daughter Victoria and her husband Jean-Baptiste Thiérrée return to London with Le Cirque Invisible, complete with  costumed transformations, unicycles, rabbits, hats and singing knees . The enchanting couplehave been reviving classic magic tricks and creating their elaborate dreamscapes all over the world, evolving the show along with its audience.

Jean-Baptiste Thiérrée was born in Paris, where he worked as an as actor with directors including Jean-Marie Serreau, Roger Planchon and Peter Brooke. At the age of 25 he set up his own company and spent three years creating shows and appearing in films such as Muriel by Alain Resnais, Sweet and Sour, Piège and The Clowns by Fellini. After moving into circus, he met Victoria and has been performing with her ever since.

Victoria Chaplin is an acrobat and a master of quick change acts. She was born in Santa Monica, near Los Angeles, and moved to Switzerland where she grew up studying dance and classical music. As well as her work with Jean-Baptiste, she designed costumes with Lilian Boitel for La Symphonie du Hanneton, her son James’ show, which won them the Molière for best costumes in 2006, and choreographed and directed her daughter Aurélia’s show, L’Oratorio d’Aurélia.

Jean-Baptiste and Victoria  have been performing together for over forty years. They started with Le Cirque Bonjour before creating Le Cirque Imaginaire and Le Cirque Invisible. Their children, James and Aurélia Thiérrée, both performed with their parents and have gone on to independent performing careers.