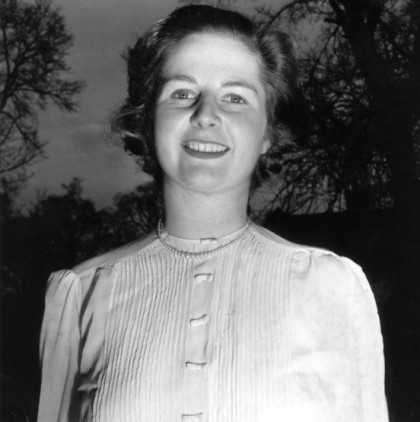 Margaret Thatcher was more than just the first and only female Prime Minister Britain has ever had. She was a regular woman on the inside and on the outside she made a few people tremble at the sound of her voice. Margaret Thatcher was a strong willed woman with a determined goal and ambition. No matter what side of the fence you stand, it is clear to say she touched the hearts of men and women everywhere. I have decided to dig deeper into the past of our beloved Margaret Thatcher who passed away on April 8, 2013 of a stroke.

How did a grocer’s daughter come to be Britain’s most influential Prime Minister? Margaret Thatcher was born October 13, 1925 in Grantham, England. She was a good student in school and later attended Oxford University where she studied chemistry. Two years after graduating college she made her first political move for a public officer and then two years later married Denis Thatcher and had twins together, Carol and Mark.

Many women saw her as an inspiration and looked up to her because she was a diligent worker and intellectual in her approach to politics. She was referred to as the Iron Lady which was derived from the Soviet press in 1976 because of her toughness in both her political and personal life. She set the trend for other women to follow. She was humble about her importance in the political world because although she was a ruling politician for eleven years, she still made home cooked meals every night for her husband. She had a unique ability to be both loving and caring and often came home with dirty handprints all over her clothes, which she liked. She was quoted saying, “Touching is an affectionate thing.”

Like every women she was very fond of handbags and always had one, which matched perfectly with her British hats and suits. As a woman myself I for one know the importance most women have towards dieting. Women tend to always diet and worry about what to eat; and Thatcher was no stranger to this common trait. She watched and limited what she ate. Her style of purses and pocketbooks resembled her as a person; conservative, intimidating and feminine. She carried her purses with personality and power. She went through different stages of fashion throughout her career. At one point stylists criticized her for dressing too drab. One of the companies that reached out to her in the early days was none other than Marks and Spencer who identified with her need to be styled in a way that conveyed authority. As part of the rebranding of her image, she also dyed her hair from blonde to a darker shade in an effort to be taken more seriously. Thatcher believed that having a hairstyle made you feel good. “I have to remember to keep my head up all the time.  If you lower your chin while giving a speech then you look all double chins.” A quote from the Iron Lady herself and something all women should live by not only because it is funny and quirky but because it is true in more ways than one. You must remember to keep your head up high in all situations and to be proud.

Margaret Thatcher was such a lovely humble woman. She was not only a leader; she was a loving mother, wife and daughter. She lived her life to the fullest in every way possible, as everyone should. She met new people and made new friends from all over the world. She was able to lead as a prime minister and inspired women everywhere to be proud of whom they are, to follow their dreams. Although she was just an ordinary woman, she changed the world all around her in an extraordinary way. She did not let critics bring her down. She is the perfect role model for both men and women to look up to. Although she is no longer around, another Margaret Thatcher is out there somewhere just waiting to emerge into this crazy world and it could be YOU!