Revolutionising the where in “we are what we wear” 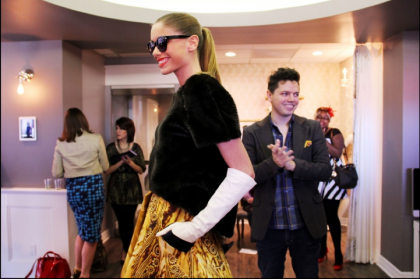 A small country town in England’s West Country is set to become a leading fashion centre.

When designers Anna Perra and Robin Chater decided to launch their fashion design partnership their first thoughts were to locate it in Robin’s adopted country of France or Anna’s home city of Rome.  But Anna already had a fashion outlet in Somerset and that convinced her that the West of England was the place to start a fashion revolution for men and women. And thus was born The Fashion Design Studio Limited.

“ Curiously” remarks Anna “the location for our initial studio became all too obvious.  If the aim of a fashion designer is to encapsulate all that is beautiful in the world then the natural place to design is where the location is also as beautiful as it gets – and in England there are few more beautiful little towns than Castle Cary in Somerset. The town also has the advantage of having a main line station with direct trains to London and that has attracted a lot of sophisticated, creative and successful people to come and live in and around the town”.

Robin has for some time combined the design of shirts and jackets with his “day job” as one of Europe’s top business leaders. “ I have been Secretary-General of the Federation of European Employers (FedEE) since the Federation was founded 24 years ago , but that has not stopped me from my creative passion for poetry and design. Robin was formerly head of practice at one of Britain’s leading product and industrial design companies Cambridge Consultants where he worked with a number of clothing manufacturers. He has long been an an advocate for regenerating the clothing industry in Europe.

“As the recent disasters in Bangladesh have illustrated only too well we in the west must stop relying on low cost labour to cloth us.  We must all get used to paying more for what we wear and start demanding better quality products that are produced by local workers. During the last 20-30 years we have offshored clothing production so much that tailoring skills are now in short supply. Only in Italy and Spain are there sufficient numbers of highly skilled people who can cut and hem to high professional standards.”

The Fashion Design Studio is committed to supporting European production and will be calling on the best available skills to produce its unique garments.  The company is even bringing in top designers from Italy to help develop its revolutionary designs for men.

“ Most of our projects are still under wraps”  admits Robin “ but we hope to have at least one of our shirts on display this Saturday when our studio opens for business“ .

As well as being a design and sales base for Anna and Robin’s creations the studio will also be retailing a wide range of women’s clothing from top fashion houses in Italy, the Netherlands and Denmark.

The Fashion Design Studio is located at 13 Fore Street, Castle Cary, Somerset and shall open from 9.30 am on Saturday, April 27th 2013.  Anna and Robin will be available for interview all day, although an appointment is recommended