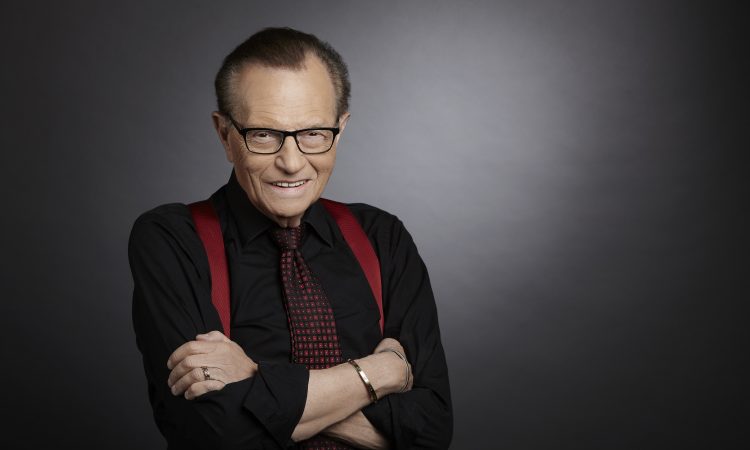 Larry King (born Lawrence Harvey Zeiger;  November 19, 1933) is an American television and radio host, whose work has been recognized with awards including two Peabodys and 10 Cable ACE Awards.

He began as a local Florida journalist and radio interviewer in the 1950s and 1960s and became prominent as an all-night national radio broadcaster starting in 1978. From 1985 to 2010, he hosted the nightly interview television program Larry King Live on CNN. He currently hosts Larry King Now on Hulu and RT America during the week, and on Thursdays, he hosts Politicking with Larry King, a weekly political talk show which airs in the evening on the same two channels.

He started his Larry King Live CNN show in June 1985, hosting a broad range of guests from controversial figures of UFO conspiracy theories and alleged psychics, to prominent politicians and leading figures in the entertainment industry, often doing their first or only interview on breaking news stories on his show. After doing his CNN show from 9 to 10 p.m., King would then travel to his Mutual Radio office to do his radio show, when both shows still aired.

Unlike many interviewers, King has a direct, non-confrontational approach. His reputation for asking easy, open-ended questions have made him attractive to important figures who want to state their position while avoiding being challenged on contentious topics. King has said that when interviewing authors, he does not read their books in advance so that he will not know more than his audience.

Throughout his career King has interviewed many of the leading figures of his time. According to CNN, King has conducted more than 30,000 interviews in his career.

King also wrote a regular newspaper column in USA Today for almost 20 years, from shortly after that first national newspaper’s debut in Baltimore-Washington in 1982 until September 2001. The column consisted of short “plugs, superlatives and dropped names” but was dropped when the newspaper redesigned its “Life” section. The column was resurrected in blog form in November 2008 and on Twitter in April 2009.

Larry King will be honoured at the National Film & TV Awards 2018 for his decades of contribution to Television. The celebration of his amazing achievements will take place on the 5th of December 2018 at the Globe Theatre.