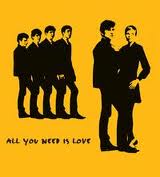 Showing at: Duke of York’s Theatre

Backbeat brings the story of the emergence of the world’s greatest band, The Beatles, to the London stage.

This musical version of Backbeat, Iain Softley’s 1994 film, follows John Lennon, Paul McCartney, George Harrison, Pete Best and Stuart Sutcliffe as they embark on their journey from Liverpool’s famous docks to search for success in Hamburg’s insalubrious red light district. Performing in the clubs of the Reeperbahn, they would play rock ‘n’ roll cover after rock ‘n’ roll cover every single night. These musical classic – including Twist And Shout, Long Tall Sally and Mr Postman – are included in the stage musical.

At the heart of Backbeat is the triangular relationship between Lennon, his best friend and The Beatles’s original bassist Sutcliffe, and German photographer Astrid Kirchherr, with whom Kirchherr fell in love.

The stage musical version of Backbeat was first seen at the Glasgow Citizens Theatre in 2010. It is directed in London by the award-winning avid Leveaux.