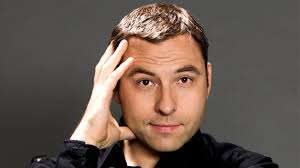 Britain’s Got Talent judge David Walliams has officially been hailed as the nation’s best-loved celebrity dad. The telly funnyman, 41, became a father for the first time last month when Dutch model wife Lara Stone gave birth to their son Alfred.

Ex-Take That star Williams, 39, is dad to daughter Theodora, born to his wife Ayda Field on October last year.

Double Olympic gold medallist Mo Farah, who became a dad to twins Aisha and Amani in August 2012 with new wife Tania Neil, was third in the Doting Dad poll of 2,000 mums by a  parenting website.

“We are thrilled David has won.

”Everyday mums no doubt warm to David as he clearly doesn’t take himself or his fame too seriously and along with his wife Lara, seems to have a down-to-earth, fun approach to life, managing to keep their relationship and new baby as private as possible.”

London-born Walliams was hailed for his warm personality, comedy genius and huge success as a children’s author.

Prominent celebrity dads who missed out were Guy Ritchie and Alex Reid.