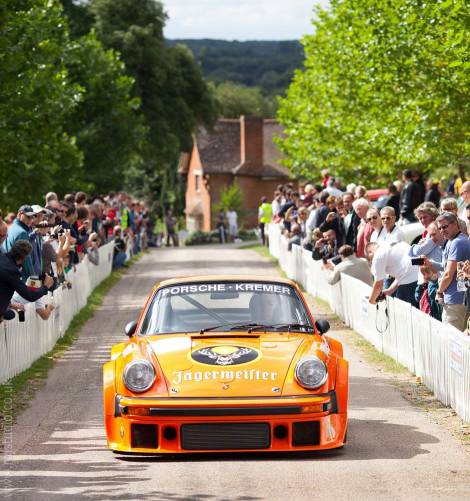 Auctioneers Coys have announced new ground-breaking auctions which are set to take place  in September at the prestigious Porsche Classics at the Castle meeting during the International Motor Show in Frankfurt.

In the year of the 60th anniversary of the very first production 356 Carrera, Coys will hold on Sunday 6th September the world’s  most exclusive pre-1974 Porsche auction during the well-known Porsche Classics at the Castle event at the Hedingham Castle in Essex, United Kingdom. Now, i know some of you Chelsea Monthly readers are big fans of Porsche judging by our coverage and response last year of the luxury car manufacturer.

The classic Porsche meeting has grown over the years and is now a highlight event. For this occasion, Coys will line up a selection of just 35 of the finest and most rare examples of the Stuttgart manufacturer, both road and racing cars.

Coys auctioneer Guy Newton said: “Both personally and with Coys I have enjoyed a lifetime association with the Porsche brand and family and am delighted to be involved in what is said to become the most exclusive Porsche auction in the world”

The second sale on Saturday 26th September is one of the most exciting announcements in the auctioning world in recent times, as Coys become the exclusive auction partner of the International Motor Show in Frankfurt, Germany. This is Europe’s largest motor show with over a million visitors and sees the launch of some of the greatest and most important cars in the world.

Chris Routledge, Managing Partner of Coys, said: For a number of years now, the historic and modern car worlds have blended, forming an unbroken line of history and heritage together. As seen at the Geneva International Motor Show, modern manufacturers are deeply focused on the heritage and nostalgic elements with classic cars featuring on every major marque stand.

He added: “Historic content at the Frankfurt show will be significant in this new era, and Coys auction will be a ground-breaking one, what you can expect from Germany’s leading classic car auction brand