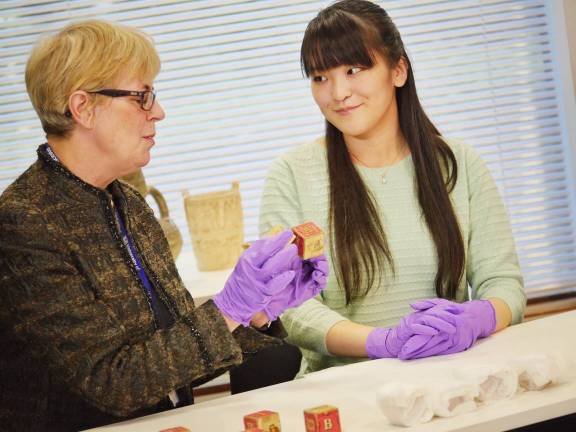 Princess Mako of Akishino is returning to the University in order to be awarded her postgraduate degree in Museum Studies.

She will be presented with her degree certificate by Chancellor of the University Lord Grocott at a ceremony in De Montfort Hall on Thursday 21 January, starting at 11am.
Princess Mako has achieved her Master’s degree in Art Museum and Gallery Studies after a year in the department and studying on campus.

Head of the School of Museum Studies Suzanne MacLeod said: “We are delighted that Princess Mako has decided to return to Leicester to receive her degree in person and also attend a reception for graduates in our School. Staff who taught Her Imperial Highness will have a chance to meet with her again.

“We have a strong connection to the cultural profession in Japan with many students graduating from our School to take up posts in museums and galleries there and so it felt very natural that Mako should come and follow her interests with us. She has been a pleasure to teach, has worked incredibly hard and should be very proud of her achievements.’’

Speaking at a press opportunity marking the end of her year of taught Master’s degree, Princess Mako said in Japanese that “her time at the University of Leicester had been ‘a wonderful experience’.”

She later added: “I would like to express my sincere gratitude for having had the opportunity to pursue my studies in such a favourable environment. It has been a very fruitful year for me. I hope to apply what I have learned at postgraduate school in the future.”

She had been studying at the University of Leicester since September 2014 during which time she has lived amongst other students in the University’s Halls of Residence and undertaken an intensive and varied course of study in the School of Museum Studies. As part of her degree programme Princess Mako has also completed a placement at Coventry Museums and collections-based research at New Walk Museum in Leicester.

During her MA in Art Museum and Gallery Studies, Princess Mako had to engage critically and creatively with wide ranging ideas and issues to develop both philosophical approaches and the practical methods and skills necessary for her chosen discipline. She has received training in collections care and management, studied the social roles and responsibilities of museums and galleries, built an exhibition with students from around the world and worked hard to develop new approaches to audience engagement with art.

President and Vice-Chancellor of the University of Leicester Professor Paul Boyle said: “Leicester’s School of Museum Studies is world-renowned and is among the highest ranked research departments in the UK. We are delighted that Princess Mako chose to study with us and trust that she had a wonderful time in Leicester. We will be proud to count her among our alumni and hope that she will continue to engage with our University in the future.”

Princess Mako will join hundreds of students and their friends and families from around the world for the University of Leicester postgraduate degree ceremonies.