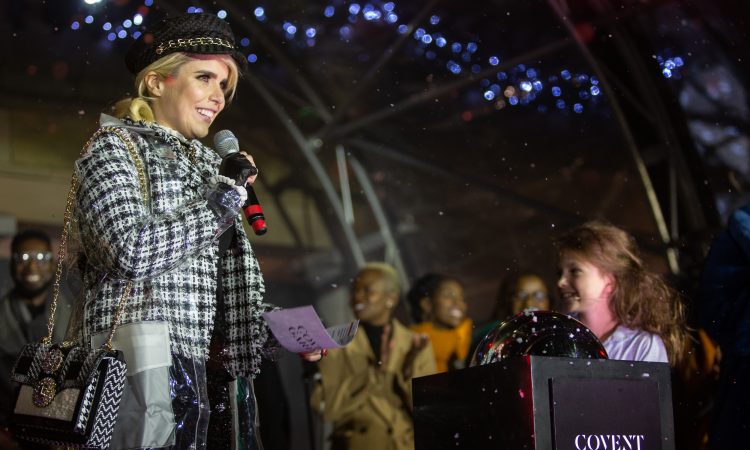 PALOMA FAITH, THE KINGDOM CHOIR AND CAST OF THE ROYAL SHAKESPEARE COMPANY’S MATILDA THE MUSICAL‘SWITCH ON’

The festive season started in Covent Garden last night with a ‘switch on’ extravaganza, as singing sensation Paloma Faith was joined by The Kingdom Choir and stars of the Royal Shakespeare Company’s Matilda The Musical to officially ‘switch on’ the Christmas lights. This year’s festivities were in support of charity Crisis.

The multi award-winning West End production of Roald Dahl’s Matilda The Musical kicked off the evening’s entertainment, performing Naughty for the crowds before handing over to Royal Wedding favourites The Kingdom Choir who performed a five-song medley including favourite Stand By Me to get the crowd in a festive mood. After their performance, Paloma joined the stage, where she pressed the button to illuminate Covent Garden’s famous Christmas tree and the 115,000 lights adorning the Covent Garden estate.

Paloma, The Kingdom Choir and the cast of Matilda the Musical then led the crowds in a rousing rendition of We Wish You a Merry Christmas to end the show.

The ‘switch on’ moment lit up Covent Garden, with London’s biggest hand-picked Christmas tree – standing at 55ft tall in the piazza and weighing a whopping 1.5 tonnes – glittering with 30,000 lights. The lights also illuminated the glitter covered bow on the corner of James Street, the iconic mistletoe and glitter balls in the Market Building and the brand new ‘infinity chamber’ light installation in Conduit Court, off Floral Street.

Paloma Faith said: “It was a pleasure to turn on Covent Garden’s Christmas lights this year, I love Christmas and there is nowhere in London that evokes that magical Christmas spirit quite like Covent Garden.”