HomeMusicThe Boondock Hippy takes us behind the music
Music

The Boondock Hippy takes us behind the music 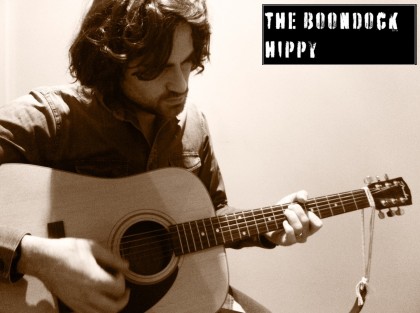 We get to speak with Steve Keenlyside, musical mind behind ‘The Boondock Hippy’ and where his soulful acoustic songs come from…

Hi Steve, thanks for talking to us today. So where did the Boondock Hippy come from? Are you really a hippy or is it just a stage name?

I’ll begin with the 2nd part of the name if I may. I think i’ve always been a bit of a hippie at heart. It all stems from the kind of music my father introduced me too as a kid. He was into the folk heroes of the 60’s/70’s like Dylan and Hendrix and bands like Zeppelin, Creedence and Canned Heat. Artists who really had something to say and whom preached strong messages of equality and peace.  I used the term hippy with a “y” simply because it seemed more iconic.

The 1st part of my name comes from one of my favourite films; called “The Boondock Saints”, which; if you haven’t seen it, actually makes my stage name a slight contradiction in terms, as the saints are vigilantes. However, they fight for a good cause……I’m all about good causes me, and doing what’s right!!!

What motivates you to write music? Has it always been a big part of your life?

Music has always been a huge part of my life. I started playing the guitar when I was around 12 years old and have never looked back. If I am not playing music then I am listening to it and vice versa. I also wanted to be able to record songs in their entirety, so I I taught myself to play the piano, the bass and the drums.I’m certainly no John Legend, Flea or Reni respetively…but Its important to me to be able to view songs from each musical perspective, so that’s why I learned……

The one contemporary artist that I fully admire right now is Cosmo Jarvis. The way he structures songs and the way he puts lyrics together is nothing short of genius, so i would definitely say him as a current influence.

If we are talking any artist, alive or dead to play with, It would have to be The Rolling Stones….no question

You’re releasing a track called Maverick on the Independent Charts, this is your second release now I believe, could you tell us a little more about the song?

Level Films released a flick this year called The Endless Winter-A Very British Surf Movie, which absolutely blew me away. I was so inspired by the film that I wrote a couple of songs dedicated to it. …..”Maverick” is one of these songs. I’m a surfer myself so that is why it really struck a chord with me. If
you haven’t seen the film then please check it out!!!.

The band is based in London. Recently, we have just been playing pub shows and some smaller venues in the city just to keep the live performences “tuned”. We took a bit of time out from live shows this year in order to write new material. 2x albums have been produced since that point. “Life in the Slow Lane” and “Dylan’s Gold”, both of which has been received really well.

My Favourite venue that we’ve done would have to be The Clapham Grand.

The main challenge is one that every unsigned band faces really. It’s so difficult to take it to the next level because the competition is so fierce. I have found that Social Networking has really opened up new avenues for the band that just weren’t available before. I am now getting my music out to people on a much larger scale, and things are really beginning to take off. Supporting my local music scene has also been a big thing. The IIC Showcases being a great example of this

What does the future have in hold for the Boondock Hippy? Are you interested in taking on America, or the rest of the world?

Haha, Of course, but I need to focus on our own fair shores first!