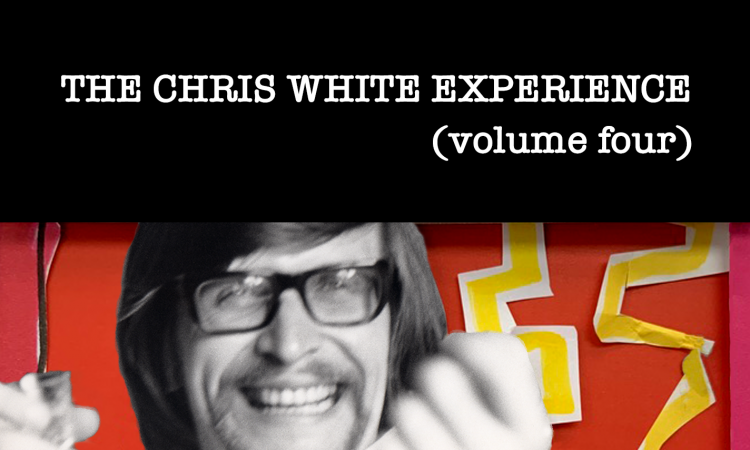 In 2019 The Zombies were inducted into the Rock and Roll Hall of Fame. On stage with the rest of the band was Chris White; co-producer and writer of more than half of the seminal Odessey & Oracle album, composer of (the now standard) This Will Be Our Year and writer and co-producer of the worldwide hit Hold Your Head Up for Argent.

His acceptance speech from the night, widely quoted in Rolling Stone, summarised the golden age of recording: “Music and songs are the bookmarks in all our lives, it’s the language that binds us all together”.

The Chris White Experience is an incredible collection of unreleased and lost recordings from the last 50 years. After The Zombies, Chris White has continued to write and produce records for a number of artists. Sessions that went on to become great albums (Colin Blunstone, Argent, Michael Fennelly, Doris Troy, Elaine Simmons) with further productions filled with released material (Charlie Dore, Dire Straits, Moonstone).

The popularity of his songwriting has been celebrated by many artists (Tom Petty, The Foo Fighters). This volume concentrates on another strand of Chris White’s career – the role of producer and his work with the songs of other great writers. The collection of productions, collaborations, and unreleased gems is the fourth in an acclaimed series detailing his work as a songwriter and producer between 1969-2019. Most of these recordings have long been deleted, lost to the great musical archive, restored here to showcase the songwriting of Russ Ballard, Leon Russell, and Richard Myhill amongst others.

The rest are unreleased or rare recordings featuring the incredible talents of Argent, Duffy Power, Colin Blunstone, and Marti Caine. Following on from the much-celebrated Volumes One, Two, and Three, it is a brilliant and vital document in the history of British music and analogue recording. The Chris White Experience – Volume Four features 12 tracks showcasing his considerable production catalogue, with so much more to discover.

This is the fourth volume from The Chris White Experience, detailing hundreds of unreleased recordings, songs, and productions from Chris White of The Zombies.

First up was  Do You Want To Make Love featuring Francie Conway, a gruelling, Tequila-engorged meditation on romance, love and direct power. The songwriting and production on this track is second to none and you get the feeling of prying into a very personal conversation playing the spy with a role of the fly on the wall.

Of the album’s 12 songs, of which a majority have never been released, making this the most revelatory of The Chris White Experience  recent run of archives releases. Musically, Woman in your arms  returns to the original rock and roll sound albeit in a happier time. Fitting for the second single armed with a  despairing mindset, it’s ragged, frayed, confrontational, and offhandedly raw, soft-rock driven and soothing.

“I used to go around with men you might find strange, but being young, nothing ventured nothing gained,” the late great Marti Cane declares on the opener. Marti Caine, born Lynne Denise Shepherd, was an English comedian, actress, dancer, presenter, singer, and writer, who first came to national attention by winning the television talent show New Faces.

“Mr Galileo,” featuring Chris White his caustic words melting into the guitar and by the time the hook enters into full listening view “Mr Galileo thank you for what you done” you already submerged into the beauty of the track. It’s a classic, a masterpiece and a hit all rolled into one. On “Oh Doctor,”  you get a  slow-burner that definitely becomes catchy after two plays.  “Dancin Heatwave” is certainly more optimistic, as Dune playfully sings his way into the history books. And then there’s “Latino,” featuring Sebastian Santa Maria a barnyard number with a slow keyboard build and powered by voice that asserts truth and honesty in motion, “Too many times i had to wait, too many times i was too late, too many times i had to lie,” as if seeing an ex-lover who now appears as a phantom.

Such raw feelings of loss also color “Latino”, throwaway moments that you just can help but connect to. Similar to “Hummingbird” featuring Duffy Power which takes the listener to a  destination ditty from the vault to music paradise. On it, Duffy seems to imagine finding new love as an impossible escape from reality.

It’s important to remember that  after decades of holding back, he’s finally letting this music out into the world. But, in a sense, it’s hard to think of a better time to hunker down and listen to songs of love, romance, anguish, confusion, and isolation. This is an album that proves something beautiful and enduring can come from even the most dire circumstances.

Find out more at: thechriswhiteexperience.com