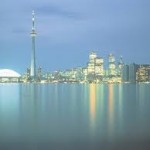 American billionaire Donald Trump has expanded his luxury property chain with the opening of Trump International hotel and towers in Toronto. The 66 year old, who acts as the boss in the American version of TV reality show The Apprentice, founded the series of hotel and residential towers throughout the US since the 2001 opening of Trump World Towers in New York City. The skyscraper marks the latest build in the Canadian city, which has seen a boom in luxury property in recent years. Trump Towers: Toronto is set to tower over its competition as at 65 stories it dwarfs any other residential building in Canada.

When it comes to luxury skyscrapers, it’s not just size that matters though as it is as much about the decoration and style of the interior. Trump Towers is not short of opulence, with 261 rooms, all equipped with all the necessities you could possibly want from a luxury hotel, from flat screen TV’s in the bedroom, living room and bathroom to marble kitchen counters. The crowning glory of the tower though is the 4000 square foot Presidential suite, which comes with a sound proofed media room and its very own private dining room.

Trumps new tower offers some of the best views of Toronto, with spa and wellness facility on the 31st floor offering luxury pampering Trump has devised the best way to enjoy the sights of this stunning city.

Toronto’s new landmark opened on the 31st of January and has been built in conjunction with Zeilder Partnerships. You can get a room from $575 a night, while buying a suite costs $6 million.