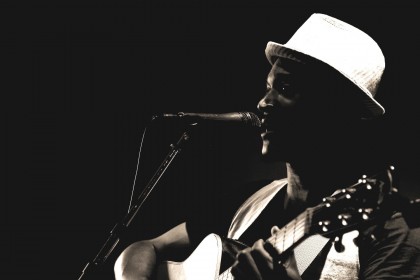 Today we get the exclusive scoop with Sheldon Botler as he speaks about his music and the road he’s taken to get to where he is today with his music. Sheldon has a song coming out on the 25th of October on the Independent Charts called ‘Day Dreaming’, keep your eyes and ears peeled people!

Hi Sheldon, thanks for taking the time to speak with us today! Could you
enlighten our reader as to how you got started in music, when did you make
the change from listener to musician?

It took me a long time to really consider myself a musician. Though I had done music as a hobby my entire life, it had never dawned on me that I was worthy of performing around the world or making this my career path. Though I had made my first recording when I was 2 years old, with my father, it still did not make sense to me. He was playing the keyboard and I was in the background singing “ DOOO DOOO DOOOOOO!!!!” off pitch at the the the top of my lungs. By elementary school I had begun my career as the playground minstrel, singing tunes I had heard on the radio and performing at local talent shows. Still it was nothing more than a fun thing to do. I had even begun my recording career about this time. Anybody remember tape decks with a record button? I had two of them. I would record original lyrics and melodies into one, the play it and record myself and that track together. I would make entire choirs come to life and play my keyboard in the background. I loved making music, but I didn’t take myself seriously.

It was not until college that a friend of mine, Tyler Broussard, sat me down and said “you’ve got to choose,” and I realized music was my choice of inspiration and career. He made me realize that, while I was studying for exams and preparing to be a Multicultural Youth Program Development Major, I spent most of my time doing music, talking about music, eating with musicians, and performing everywhere. He also was the first person to most eloquently say that  “no one can sound like you but you, so stop competing with others, you are your competition.” To all musicians out there, remember these words, please haha.

Which artists have inspired your music from then until now?

Since I was a child I was always inspired by Stevie Wonder’s writing and arrangement. Now matter what the song, he managed to capture the emotion of the subject matter and he as done so countless times since his beginnings. I love his work. Another artists I am very inspired by is Bilal. By far, he is one of the most soulful and unique artists I have heard in a long time. Mind you, I have countless influences of all genres, only these two have stuck with me for the longest amount of time. And if you haven’t heard of Austin Jenckes, Raul Midon, India Arie, John Legend or Alicia Keys well you’re just missing out!

What about the creative process? Where does the song begin, a melody, a
lyrics, or just a feeling?

My creative process is sort of like dating. It’s never the same, no formula works with each song, and it is often the most rewarding and frustrating thing ever. My songs usually start with a moment of inspiration, either a song lyric, a kick drum that hits me a certain way, a melody or a theme. I tend to run with either one of them as a starting point and begin recording. Then I see where it takes me. For instance, Day Dreaming started off as the opening riff. I recorded the guitar for that piece straight through to a click track, unrehearsed and raw. I went through it about 3 or 4 times re-recording the same idea and the last run through was perfect, so I built everything around what I had recorded and bam! Music! I don’t think there are really rules for how a song should be created. Sure there are effective methods, but a method is simply a tool for starting, and the more tools you have, that you know how to use, the more efficiently you can navigate the creative process. But I don’t believe there is one way to write a song.

How many hours do you spend practicing or writing a day?

About an hour or two a day. And it looks different every day, I am still writing a regimen.

Well if you must know lol! I am performing at the Grammy Museum on December 12th as a finalist in the Be Heard Artist Showcase! Be there!!! This showcase is filled with some of the most talented artists I have been exposed to in some time and we all would love your support.

Have you got a favourite venue? If you could play any venue with any
artist who would it be and where?

My favorite venue is in Seattle, the Lucid Jazz Lounge. It’s owned by a man names Davide Pierre-Louis. This man is the definition of good taste and hospitality. The food is amazing, the customer service is phenomenal and the venue itself is something between classy, intimate, serene and bumpin, all at the same time. But! if I could perform anywhere, with anyone it would be a few persons actually. Okay, check this out …the ultimate show! Alicia Keys, India Aire, Raul Midon, CT Carson, Austin Jenckes and myself at the Nokia Center in Los Angeles, with choreography, singing, a live band, audience participation and thousands of screaming loving people.

What challenges have you faced on the road to get where you are now? How
did you make it through?

For the longest time I was afraid to try. Simply afraid to try. The first step in overcoming this fear was to first be honest with myself about what I wanted out of life. Then making a plan about what I was going to do to get there. Lastly, the hard part, doing it everyday. Like many people, I have been my worst enemy and my biggest fan simultaneously. Not always fun, but a beautiful process.

Get over yourself! Love change! NEVER stop being creative! And finally, don’t be afraid to ask for support. If you are driven and work hard, people will support and follow you. There is nothing more simple or more difficult that to pursue your dreams, but life just is not worth it if you don’t. Oh and please have a purpose! Mine is to help people heal though music, to be entertaining and to tell stories that anyone can relate to, despite cultural barriers.

What does the future hold for your music? Is there a master plan or are
you just going to keep doing what you do best?

Here’s the master plan. In a year I want to be signed to an entertainment agency and continue to book gigs as an actor and entertainer. I want to tour international, collaborating with other musicians who believe in healing through music, and to make money performing, teaching, writing songs and placing music in films/commercials and on the radio.